Most experts will tell you market timing doesn't work. And sometimes they're right... when it comes to long-term investments.

Investing experts at Charles Schwab, MarketWatch, Forbes, and CNBC will tell you the best way to build wealth is to invest regularly and for the long term.

But in 2017, market timing is the best way to make fast profits in the markets, outside of your long-term investments. Plus, market timing is particularly lucrative when the markets are volatile, which they are right now. Just take a look at the CBOE Volatility Index (IndexCBOE: VIX), which has spiked 12.2% since last Thursday.

On Monday, his specialized timing alerts told him it was time to trade AbbVie Inc. (NYSE: ABBV), and then Tuesday it doubled from the initial investment point. That's a 100% profit in just one day.

There are five strategies that Gentile frequently uses to time the market. Today we will talk about one...

Support and resistance is the concept that a stock typically trades within a certain window, or channel, unless other forces (like earnings reports or a general market downturn) act on the stock price.

Support is the price at which the stock is supported from trading any lower. Downtrends in price tend to slow as a stock approaches support because of a concentration of demand. A number of traders are willing to buy that stock at the support level.

Resistance is the price at which a stock resists going any higher in price. Uptrends in price tend to lose steam at resistance because of a concentration of supply. A surge in traders that are willing to sell at the resistance level help maintain the stock's price. 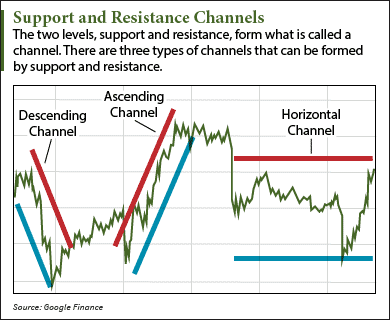 A horizontal channel is when the price fluctuates between support and resistance but doesn't make a move higher or lower than the average price the stock has been trading around. The lines of a horizontal channel go straight across the graph.

An example of a horizontal channel is if the stock of XYZ Company is trading between $5 and $10 for several days. It may go as high as $10 and as low as $5, but it doesn't make any moves to go higher or lower than those levels.

An ascending channel is formed when a stock is trading in a range but the high point and the low point keep rising. For example, today XYZ Company is trading between $5 and $10. Tomorrow it trades between $7 and $12. The next day it trades between $8 and $13. This pattern will continue for a period and then a new horizontal channel will form as the price jump levels off.

A descending channel is formed when a stock is trading in a range but the high point and the low point keep dropping. For example, today XYZ Company is trading between $5 and $10. Tomorrow it will trade between $4 and $9. The next day the company will trade between $2 and $7. This pattern will continue until a new horizontal channel forms as the price drop levels off.

There is one more component of support and resistance to talk about before we get into how to use it to time the market this year. That component is channel reliability.

Channel reliability refers to how strong the support and resistance lines are for a stock at a given time. If the stock price hits the support line several times and does not drop below it and hits the resistance line several times and does not go above it, then the channel reliability is high. That channel can be relied on until a market force pushes the stock price either up or down.

Now for the fun part: using support and resistance to time the market...

Using Support and Resistance to Time the Market

There are two main ways you can use support and resistance to time the market. One is using the cycle of highs and lows.

Using the cycle to trade usually doesn't make sense for buying and selling a stock because the profits would be too small. Trading options on the other hand can lead to larger profits with small moves in the underlying stock's price.

The other way to use support and resistance for market timing in 2017 is by looking for a wedge pattern. A wedge pattern forms when the support line rises and the resistance line falls. This pattern cannot go on long. The trick is to determine which direction the price will go.

There is also a third way to play the wedge. You can use a non-directional options trade (a trade that doesn't need the stock to move a certain direction, it just needs to move) such as a straddle. This will allow you to profit no matter which way the stock moves, it just has to move. The wedge pattern will guarantee the stock price moves, making this a great choice.

When the stock does break out of its current support and resistance, it will likely form a new channel of about the same range size. So if it was trading between 70 and 75, the new channel will be a five-point spread as well. Keep that in mind when you are considering which options trades to make. If you need a 10-point move to be profitable after fees and the normal channel is only five points, trading on a horizontal channel is probably not a good trade for you to enter.

Example of Support and Resistance: Alphabet 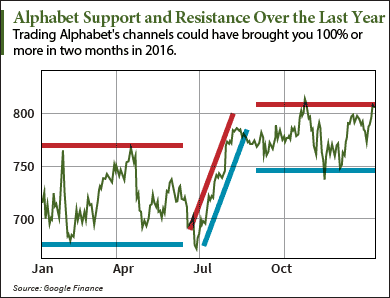 This past year, Alphabet Inc. (Nasdaq: GOOGL) gave us a great example of timing your trade based on support and resistance. As you can see from the graph to the right, Alphabet was trading in a channel between $690 and $750 for six months. After a brief pullback, it broke out of support in late June. Since Alphabet is a solid company financially, this pullback would be a time to bet on the upward momentum of the stock. It is likely the stock will recover and trade higher since the company is growing revenue. At the end of July, it leveled off and created a new channel between $750 and $800 (almost the same trading range as before).

A current two-month options contract that is four points out-of-the-money would make a 100% return if you were able to capture 50 points of the 110-point move that Alphabet made. That is a large profit for capturing just half of the upward movement of the stock.

The Bottom Line: For long-term investments, timing the market is very difficult. However, market timing can boost the profits of short-term trades. Market timing should be used as a signal for entering and exiting short-term options trades only. Gentile advises keeping every trade to 2% of your portfolio total so that you never risk too much.

Also keep in mind you will never predict the exact bottom of a low or the exact top of a high. The goal here is to buy close to the bottom of the down cycle and sell close to the top of the up cycle. Your trade may go down a little after you buy it, and it may continue to rise after you sell it. Don't panic. If you were able to buy low, sell high, and make a profit after fees, you were successful.