Energy produced from wind power in the United States has more than doubled since 2010, and the EIA forecasts it will double again in the next decade.

That sort of potential is making wind energy stocks in 2017 a popular, and very profitable, investing strategy. 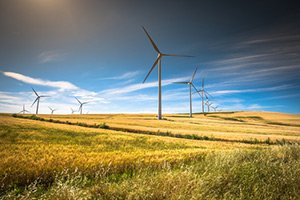 That's why we're putting together a list of wind energy stocks to help investors see what's available. And because we want Money Morning readers to make the most money from this booming industry, we're also giving you our best wind energy stock in 2017...

Here's why we're so bullish on the wind energy industry and why we see it taking our top wind energy stock to double-digit gains this year...

Why Investing in Wind Energy Has Huge Profit Potential in 2017

The EIA projects wind energy capacity will grow more than 25% by the end of 2018, and that's just the beginning.

Wind energy production is growing now that the price of wind energy is competitive with traditional energy sources. Demand is also rising.

But it's even better than that. According to EIA data, the levelized costs of new power plants running on wind energy is now the lowest of all energy sources. 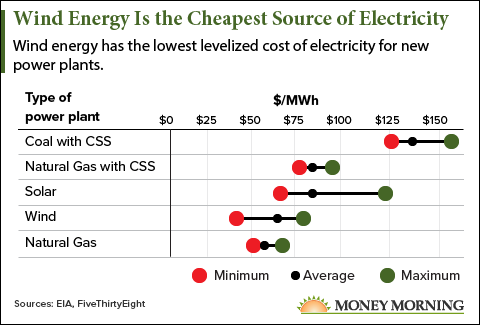 The falling cost of wind energy will be a huge catalyst for the industry over the next 10 to 20 years. Global demand for energy will rise 25% by 2040, and renewable energy, especially wind energy, will play a leading role in meeting that demand.

That's especially true as electricity produced by energy sources like coal, oil, nuclear, and renewable sources like hydropower are expected to remain flat or even decline by 2040.

Wind-generated electricity, on the other hand, will grow over 118% by 2040, according to the EIA's Annual Energy Outlook released in January. In fact, by 2040, wind power will generate the most electricity of all renewable sources, more than double the production expected of solar by then. 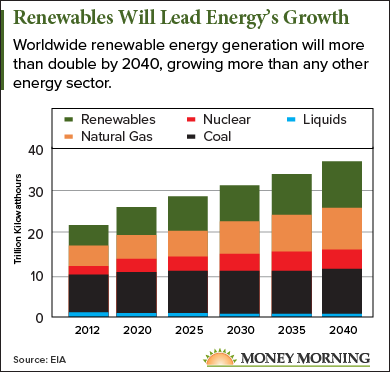 Although 2040 might seem like a long way off, this trend isn't something investors have time to wait on. Wind power production has already doubled since 2010, and the EIA expects wind energy consumption in the United States will grow 36% by 2018, or in just over another year.

That means there's still time to jump into wind energy investing and reap double-digit gains, but investors can't afford to wait any longer.

Now that you've seen why investing in wind energy could be so lucrative, here's a look at some of the most popular wind energy stocks to buy today...

But just because they're popular, doesn't mean they're worth your money. Before we get to our favorite wind energy stock to buy now, here's why these stocks are getting so much attention...

Broadwind Energy is an American energy company based in Cicero, Ill., with a small market cap of $81.6 million.

The company makes wind towers and positions itself as a renewable energy company focused on America's energy future. But the company also works in oil and gas production, and its industrial manufacturing arm used for wind towers also makes parts for oil and gas rigs. That means it's reliant on traditional energy sources for revenue.

BWEN trades at $5.51 a share, and it's down 31% over the last month. Despite those dismal numbers, the stock still has an average trading volume of nearly 500,000 shares per day, making it a popular wind energy stock. It may be a popular choice, but between the stock's volatile price and unproven potential, we aren't recommending Broadwind stock as a way to profit from the wind industry.

Gamesa Corp. is another popular wind energy stock. Gamesa is based in Spain, but its stock can be purchased in the United States on the over-the-counter (OTC) markets.

Unlike Broadwind, Gamesa is entirely devoted to the wind energy sector. Gamesa manufactures, installs, and repairs wind turbines and associated electric grids. But Gamesa's wind turbine sales are largely in developing countries, accounting for 69% of total turbine sales. The United States only makes up 11% of the company's turbine sales.

Between its reliance on sales to developing countries and its shares trading on the OTC markets, where there's less transparency, we aren't recommending wind investors buy Gamesa.

Nordex SE was founded in Denmark in 1985, but it's now headquartered in Germany.

Nordex has been installing wind turbines since 2000. The company manufactures a variety of wind turbines for different applications, including icy weather and even low wind areas.

The company's stock only trades on Danish and German stock exchanges, which can be difficult for investors to access. Even for investors whose brokerages allow trades on these foreign exchanges, fluctuations in the exchange rate can eat into profits.

Even for European investors, the stock has been volatile over the last year. It's down 37% year to date and now trades at $13.21.

It's an American company trading on the Nasdaq, and it's a stock Wall Street analysts are predicting could rise over 22% this year alone.

Our Best Wind Energy Stock in 2017