The best infrastructure stocks are those that have something more to offer beyond the boost of President-elect Donald Trump's plans to spend hundreds of billions of dollars on transportation, energy, and water projects.

Today, we're bringing readers five of the best infrastructure stocks to watch in 2017.

Trump has proposed spending between $500 billion and $1 trillion on infrastructure over the next 10 years. 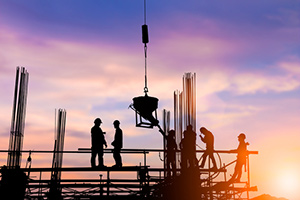 The steep increases in infrastructure stocks is not just a reaction to the potential cash infusion into this sector. It's also a vote of confidence from Wall Street that Trump will succeed in making these projects happen.

You see, Trump's plans for infrastructure have a better chance of becoming reality than just about anything else he has proposed...

Why Infrastructure Stocks Look Like Such a Good Bet

The problems with America's crumbling roads and leaky water systems are well known and undisputed. The American Society of Civil Engineers (ASCE) has estimated that the United States needs to spend $3.64 trillion on infrastructure improvements, including $1.72 trillion on surface transportation.

And the political climate couldn't be better. According to a poll taken in June for the Association of Equipment Manufacturers, 72% of voters said the federal government should be doing more to improve infrastructure.

And while Republicans control both houses of Congress, Trump can expect support from some Democrats on Capitol Hill as well. Boosting infrastructure spending has long been a goal of the Democratic Party.

"Democrats have been trying for decades, multiple decades, to get Republicans to invest in our deteriorated infrastructure," Sen. Harry Reid (D-NV) said in a Nov. 15 speech from the Senate floor. "If we can finally get Republicans to make the job-creating infrastructure investments we have been seeking for years, that will be a welcome development for the Senate and the country."

Sen. Chuck Schumer (D-NY), who will replace Reid as minority leader in January, is also known as an advocate of infrastructure spending.

The only sticking point is how Trump plans to pay for it...

There's More Than One Way to Pay for Infrastructure

Several Democrats have objected to the way Trump wants to fund his infrastructure proposals. He wants to offer about $137 billion in tax credits to private companies that would finance and build the projects themselves. The idea is that the credits will draw in hundreds of billions of dollars more in private investment, up to $1 trillion.

Critics say this approach will skew projects only toward those where companies can recoup their investment by charging tolls or fees, roads and bridges being the most obvious examples. The concern is that companies would ignore aging water infrastructure.

Related: How Trumponomics Could Produce a Boom Economy

But if Trump proves to be the dealmaker he claims to be, he will work out a compromise with the Democrats.

The seeds of such a deal lie in Trump's corporate tax reform plan. To encourage companies to repatriate some $2.6 trillion in profits stashed overseas, Trump has proposed a one-time reduction in the corporate tax rate to 10% (it's 35% now). That would raise between $100 billion and $200 billion, depending on how much money came home.

In the world of Washington politics, some kind of infrastructure deal is as close as it comes to a sure thing.

But how to find the best infrastructure stocks to buy is another matter. That's why we turned to Money Morning Capital Wave Strategist Shah Gilani...

Five of the Best Infrastructure Stocks for 2017