I spooled up my trading desk the morning of Sept. 19 and learned from the headlines screaming across my monitors that the "Great Bull" market is "dead," according to Michael Hartnett.

You may know the name, you may not.

Hartnett is Chief Investment Strategist for Bank of America Merrill Lynch and a brilliant thinker.

Still, we've heard this before...

In fact, we've heard about the end of the bull market for over a decade from all sorts of folks like author Robert Kiyosaki, who claimed – in 2002 – that a 2016 bull market crash would be the "worst market crash in history"... two years ago.

Researcher Harry Dent, who has famously been predicting a crash of epic proportions for years, doubled down in late 2017 with a prediction that the "biggest crash ever" is (probably) coming by 2020. This after predicting that the Dow would crash to 3,000 in 2013.

Former Reagan budget czar David Stockman has consistently warned of a "doozy" of a market crash because of a failure to rein in spending, tax cuts, or any number of other things. "Whistling past a graveyard" is what I think he said, even as he's repeatedly called for a 50% market plunge.

Even "Bond King" Bill Gross of Janus Henderson has been "wrong and wrong badly." And, mind you, that was according to his boss, Janus CEO Richard Weil, in remarks to CNBC this past August.

All of them have been dead wrong. 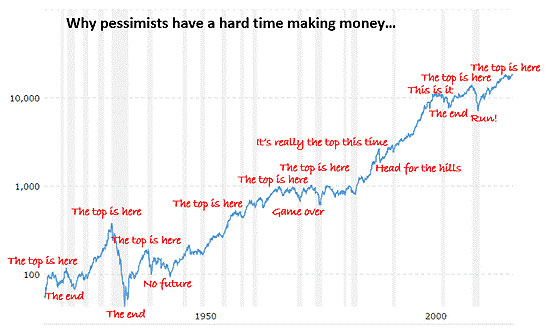 He and I are almost completely aligned when it comes to what's next... an era of lower returns, higher rates, and too much debt. Investors will have no choice but to brace for wildly different market conditions ahead, something you and I have discussed many times.

You know why just as well as I do.

The president continues to hammer China with trade tariffs and, in doing so, is taking a page straight out of his best-selling 1987 book, "The Art of the Deal." Only China may not blink like the politicos think.

The Fed is "tightening" rates up by focusing on cyclical inflation, even as they ignore structural deflation. I think what they're really doing is very simple... trying to raise rates fast enough and high enough that they get ahead of the next crisis and have room to lower them again.

Earnings are slowing, and that means a polarization of companies into groups that will "make it" and those that "won't." Bank stocks, for example, are already laggards, but they could break down completely if the relationship between their operations and higher rates/margins shatters.

The implication – at least according to the headlines and the perma-bears who seem determined to be "right" – is that you'd better run for the hills and save what you have left while you still can.

I can't think of a more expensive mistake.