News hit the wires last week that Amazon.com Inc. (Nasdaq: AMZN) has purchased a home security start-up known as "Ring" - reportedly paying $1 billion for the privilege. Predictably, analysts fell all over themselves discussing how this move places Amazon front and center in the home delivery market.

Their thinking, of course, is off the mark. Amazon's after a much bigger and far more profitable prize...

I'll get to that in a moment along with a play that could be Amazon's next target.

If you're not familiar with Ring, you'll probably want to be. 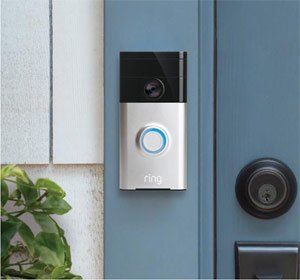 The company makes and sells video doorbells and stick-up cameras that can be placed anywhere. The two-way HD technology is terrific because it allows you to see and hear what's going on using nothing more than a cellphone from just about anywhere on the planet.

My wife and I purchased several Ring devices last year and we love 'em. Not only can we see who's at our front door but we can also review video, speak to visitors, and even check on packages. Much to our boys' chagrin, of course, we can also keep tabs on their comings and goings - but that's a story for another time.

The company also offers security sensors, flood and freeze detection, and smoke detectors. Ring devices can even "link" with other Ring users nearby to create a safer neighborhood. If no-goodniks are randomly probing your block, for example, Ring users can share activity reports. Sooner or later, they can notify the police if needed... video of the suspect(s) in hand.

That's not the reason for Amazon's interest either, though.

What Amazon ultimately wants to be is the single digital provider in your smart home.

The stakes couldn't be higher.

The first company that succeeds in positioning their devices and their ecosphere as your gateway will dominate a projected $130 billion market by 2025, growing at a compound annual rate exceeding 10% a year, according to Grand View Research.

This isn't just about devices like most investors think.

Monthly Checks... Up to Three Times Higher than Social Security? Click Here for Details and to Learn How to Stake Your Claim.

Artificial intelligence and machine learning are going to be the real revenue drivers for the foreseeable future, and devices like Ring sensors provide another "touch point" in that process.

Every competitor hoping to gain a foothold is going to have to link consumers using a series of devices like Ring to connect customers with offerings that will be increasingly regarded as "platforms" rather than services or specific products as they are thought of by most people today.

I love the idea that I can vacuum our home, for example, by shouting at our iRobot Corp. (Nasdaq: IRBT) Roomba using Amazon's digital assistant, Alexa. Exercising the dog even takes on a new dimension because she stalks the vacuum cleaner, much to my wife's dismal reaction - and my amusement. And, best of all, I can watch both on our Ring cameras... from Tokyo!

The real value is going to be how Ring's devices connect with and drive incremental voice sales from the estimated 800 million to 1 billion people around the world ready for the kind of hyper-personalized services I've just described. Roughly 80% of whom, I might add, want a single provider for their digital needs, according to Accenture.

No doubt you're beginning to put the pieces together.