China's latest ploy in the trade war could be to limit its supply of rare earth metals to the United States. But that's an opportunity for investors too…

China has found its tariffs are having limited effects on the United States. The U.S. had $539 billion worth of imports from China in 2018, compared to $120.3 billion in exports to China. That means China can't match American tariffs.

But China has a few more weapons in its arsenal, and it might be desperate enough to use them. That's why we're taking the China rare earths threat so seriously. 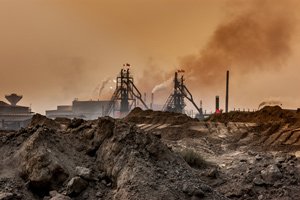 Rare earth metals is one sector where the United States is acutely dependent on China. These are 17 elements crucial to the "green economy" including technology, energy, healthcare, transportation, and even national security.

U.S. President Donald Trump's blacklisting of Chinese telecom giant Huawei may have been the final straw. And in an effort to retaliate, China's recent moves read like an obvious warning that the trade of rare earths could become weaponized.

But we've found a couple rare earth stocks particularly well-positioned to benefit, even if China follows through on its threat.

But first, here's why China's rare earth threat carries so much weight.

What Are Rare Earth Metals?

Thanks to the very specific properties of rare earths, these elements have specialized applications. Here are just a few:

All this means rare earth metals are crucial to the "green economy" since they help generate low or no emissions, maximize efficiency, and propel technology.

According to the order, a "critical mineral" is essential to the U.S. economy and national security. It comes from a supply chain at risk of disruption, and it's an essential ingredient in a product without which the U.S. economy would suffer.

The order also mandated the U.S. Geological Survey (USGS) to assemble a list of "critical minerals." By May of last year, that list was published, and it includes 35 elements. Of those 35, America relies on China for 20 and Russia for 7.

Needless to say, the Chinese are acutely aware of this fact.

The United States relies on Chinese rare earths for 80% of its rare earth imports. And China knows what power this gives it.

As far back as 1992, Chinese Premier Deng Xiaoping famously said, "The Middle East has oil. China has rare earths."

In 2010, Beijing reduced its export quota of rare earths by a dramatic 40%. Then, after the United States, EU, and Japan complained to the World Trade Organization in 2012, the quotas were dropped in 2015.

The significance of this has been overlooked by most Western media: JL Mag is located in Guanzhou, where the Communist Party started its famous 1934 Long March into the wilderness to avoid Chinese nationalists.

Jinping gave a speech at the memorial in Guanzhou, using the Long March as an analogy for the oncoming trade war, saying, "We are now embarking on a new Long March, and we must start all over again."

The graveness of Xi's remarks should tell investors that China's threats aren't empty, as he seems to be preparing his people for a long-lasting trade war.

And if China follows through on its rare earths plan, investors will want to pay close attention to the rare earths sector. In fact, we have two investments you can make to not just protect your portfolio from the fallout, but bank a profit too.

The first one is diversified, and therefore lower risk, which will help protect your profits…

The first play is VanEck Vectors Rare Earth/Strategic Metals ETF (NYSEArca: REMX), which essentially tracks the performance of a basket of companies that produce, refine, and recycle rare earth and strategic metals and minerals.

It's a $135 million ETF that trades about 250,000 shares daily. It tracks the overall performance of companies involved in mining and refining rare earth metals and minerals. And thanks to recent concerns about the Chinese clamping down on rare earth exports, it just saw trading volumes explode to nearly 5 million shares.

Below is an overview of this ETF's country weightings as of the end of April. As you can see, investors in REMX are investing in a global range of rare earth metal producers. 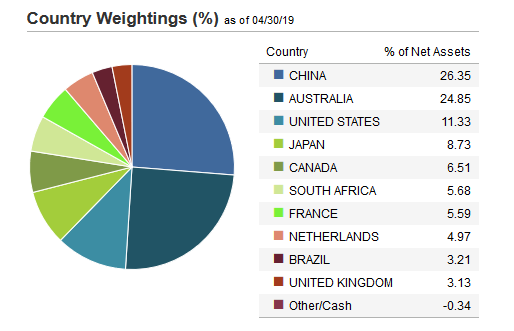 While likely to benefit from any limits on Chinese exports, REMX will see a more muted response thanks to its diversification. Shares were up about 14% in the third week of May alone. They could head even higher if China follows through on its threat.

The second is a single company whose recent actions suggest it's an American-friendly option worthy of serious consideration.

This play carries more risk, but it's likely to see far more growth if China does limit access to its rare earths.