While everyone's been talking about the Dow's third major milestone this year - breaking the 24,000 mark - I'm focusing on something else...

You see, there's a new technical pattern forming in a couple of department store stocks. If it's true and you catch it at the right time, you can make a lot of money.

But timing is everything because this pattern is a tricky one.

Make sure your kids aren't looking over your shoulder trying to read this educational piece. If you are the squeamish type, you may not be able to get through this article in one reading. I'm going to teach you a new technical pattern with a not-so-happy name.

Let's examine the profit potential of this macabre-sounding pattern that may be taking place on a couple of department store stocks...

The pattern gets its name from an old saying among traders that "even a dead cat will bounce if dropped from a high enough level."

And the same for goes for stocks. Well, it goes for stocks when you're interested in a short-term recovery-type trade, which is great for a quick profit.

A dead cat bounce (DCB) is the type of pattern that usually forms after a sustained drop in share price, let's say six months to a year. At that point, the stock may become a turnaround candidate with the potential to be a nice performer over the long haul. But that's just potential...

The stock being observed is still one that had a significant drop in share price over a long period of time.

These stocks are generally trading at or near a year's low in price, so to expect them to just bounce back to previous all-time highs or start making new highs is actually not that realistic.

The term "bounce" in the name of the strategy signifies to me this will be a somewhat sharp or quick upward move. After a stock soars again, it's not uncommon for it to fall back to Earth. In fact, it's generally likely.

It may bounce a few times at this low and start hammering a lengthier bottoming-type technical setup like a double or triple bottom, a rounding bottom, or a cup-and-handle pattern.

But it first has to bounce, and the dead cat bounce is the first pattern to watch for when stocks are at significant lows. We use it to profit from the short-term recovery of a falling stock.

A Look at Macy's 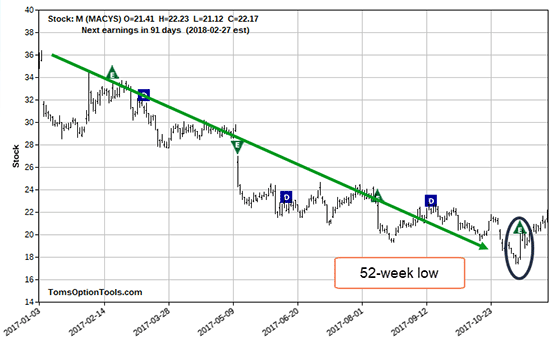 M stock dropped after all the previous earnings reports on the chart. Yet the stock recently bounced after its 52-week low. The previous post-earnings downward trend makes it hard to know if the latest report factored into the bounce.

Look at what my tools show as the percentage move of the stock after the last few earnings reports:

The most recent percentage move is on the left. It was better than the two preceding earnings reports. In the chart, you can also see how the stock moved over the last three earnings reports.

Earnings Whisper shows that Macy's earnings came in better than expected at $0.23 per share versus estimates of $0.19 per share. Revenue met expectations at $5.3 billion.

The report from the earnings website also stated Macy's expects fiscal-year earnings between $2.91 and $3.16 per share, excluding items compared to the company's previous guidance between $2.90 and $3.15 per share.

Based upon the action in the share price, we see that investors considered it favorable news. Even Jim Cramer on CNBC called M a buy at the time.

The Cause for Concern with This Pattern

Most of the time, we only notice the dead cat bounce after it has already happened...

what you showing is reversal, NOT a Dead Cat Bounce. DCB by its name is dead
run . It will bounce almost from 0 and in few days dies like Enron, NT,and many others.
You guys like the name and trying to impress people about something new they may not know.
Some of the trades running very hard down may look like Dcb when they bounce next day, but still its not Dcb its simple profit taking of short trade . They may continue down until heating demand zone , then revers.

Tom
That photo of you smiling is great! you look healthy, wealthy and wise which of course you are all that for sure. Your charm and energy shines out from that picture. It is what I seek in a portrait painting when I have time to paint.
I have been kept very busy reading all your advice lately and I admit I find your expertise fascinating and hope to continue with your service for a long time.
Let me take this opportunity to wish you and your family a very joyful Christmas and a happy New 2018 Year