Many investors believe that rising rates are bad for real estate and, by implication, for Real Estate Investment Trusts, or "REITs" for short. So they're starving themselves of badly needed income by lightening up their allocations or abandoning them entirely.

That's a huge mistake – if you understand how to pick the right REITs.

Contrary to what a lot of investors believe, REITs have historically done well when the cost of money is increasing. Between 1994 and 2017, for example, there were nine time periods when interest rates rose by more than 1% (or 100 basis points in trader speak) as measured by the 10-year U.S. Treasury note.

Six out of nine of those times, REITs provided positive returns despite the fact that those rate changes were roughly four times larger than the measly 0.25% hike Yellen just made and the three additional hikes she says she's going to make in 2017.

What most people miss is deceptively simple.

Namely that there's a big difference between a sharp rate spike in the mold of Chairman Paul Volker's 1970s "torpedo" and the slowest interest rate normalization in history that's now Yellen's legacy until, apparently, the end of time.

The former is a mechanism designed to shut down inflation and rein in speculation, while the latter is intended to maintain all the things policy makers believe free money makes possible – an improving labor market, consumer spending, and overall demand. 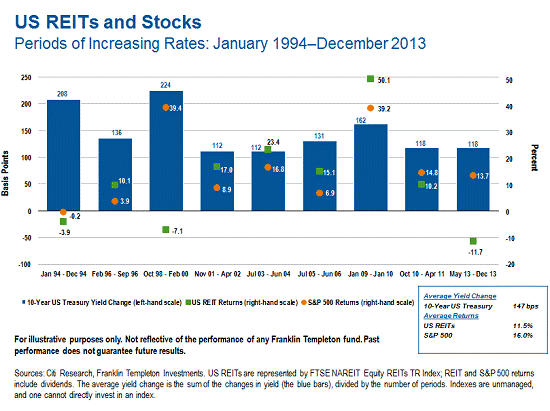 Many investors worry that "it'll be different this time" – usually more as it relates to traditional dividends and income than real estate – but either way, it really doesn't matter much.

The principle is the same.

There is a strong correlation between high total returns and the management approach taken to dividend policy over time, whether it's kicked off by regular investment activity or via real estate.

What I want you to understand for purposes of today's conversation is that simple mathematics related to income can give you a tremendous advantage in widely varied market conditions.

This applies to situations as varied as a World War, multiple regional conflicts, expansion, contraction, recessions, and more.

Which Brings Me Back to REITs…

Most REITs are publicly traded entities that make money through their investments in real estate that are usually a combination of income-producing properties. Think shopping centers, retail strip malls, offices, warehouses… all the usual stuff. They can be private or non-listed, too.

Originally created by Congress in 1960, REITs are intended to provide a structure that, for all intents and purposes, is similar to a mutual fund. They're typically broken up into two groups – so-called equity REITS and mortgage REITs.  At the start of 2016, there were more than 200 REITs in the U.S. that trade on a major stock exchange – most of them found on the NYSE.

REITs have to return 90% of their profits back to shareholders in the form of dividend income which is, of course, why they are so popular during low-rate regimes, and why so many people mistakenly believe they're going to tank as rates rise.

But there's something very important to understand here…