The reality gap I'd like to explore today is one which the U.S. oil market already had the setup to be a huge moneymaker. And then it got better.

The U.S. airstrike which killed top Iranian general, Qassim Soleimani, sent oil prices spiking higher in the Thursday to Friday overnight market, greatly improving our entry for this reality gap trade. I'll explain this profit-making opportunity in more detail, but here's a quick take on this morning's market-moving news and what we can expect.

The financial markets are experiencing significant turmoil after the airstrike that I mentioned above. Defensive investments, or places where money flows in a flight to safety, have jumped higher. These include the Japanese yen, the Swiss franc, gold, and U.S. and German bonds.

That's a typical response when uncertainty hits the market - and a military strike like this definitely qualifies. But by the time I started writing this update to the column at 7:00 a.m. EST on Friday morning, the market reaction was already changing.

The market's fear gauge - the CBOE Volatility Index (VIX) - which had spiked higher on the news, was already falling, as were oil prices. And the major market indexes like the S&P 500 had already found their lows of the morning.

In short, the market's reaction to the airstrike is acting as a test of how much geopolitical risk matters in the markets right now. Said another way, there's a very good chance that the market just absorbs this news as a temporary blip. And that will be very good news for today's trade in a struggling U.S. shale oil producer...

The U.S. shale oil industry has revolutionized the crude oil market. And it was a major - if somewhat behind-the-scenes - driver of the recovery in the U.S. economy since 2009. Take a look at this production chart: 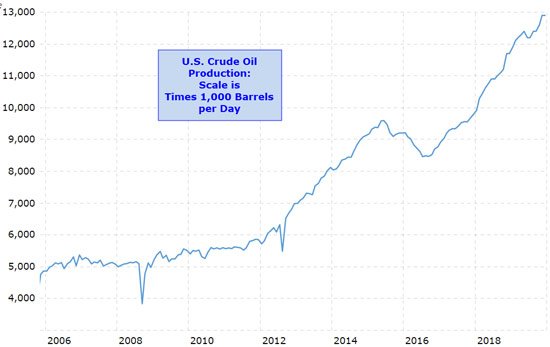 The impact of this shale oil boom on global oil economics has been immense.

But like the retail resurgence of 2019, the story of U.S. shale oil emergence is littered with haves and have nots. And as we'll see, right now it's easier to make money on one of the players that has struggled - and will continue to do so.

There's a reality gap in the shale oil world. The widely held belief is that the rising tide of crude oil production that we see in the chart above is lifting all ships. The reality is that some companies could be in big trouble because of the way they have raised money to finance their wells. And we can make money with that information that almost no one is telling you about it.

Some in the financial news media are even saying that U.S. oil companies are the best stocks to buy for 2020.

That prognostication is just people talking their book (touting the stocks they own in an effort to drive up the price), and it's dangerous to your wealth.

Now, I'm not saying that the shale industry is going under. Far from it. The "haves" will thrive, much as they did in the retail industry.

The reality gap is happening between what you're being told about U.S. fracking, and what's really happening on the ground...

More and more, small companies are about to go under. And you can make money while they do.