Many investors try to time the markets despite overwhelming evidence that doing so is a fool's errand.

I totally get where they're coming from.

The idea of picking market tops and bottoms is very seductive, but they may as well be trying to catch falling knives.

According to Nobel Laureate William Sharpe, the average investor would have to be right a staggering 82% of the time just to match "buy and hold" returns. Most investors will never get close.

Which is why the odds change radically in your favor if you learn to anticipate when market conditions favor buying or selling.

I've only seen one indicator over the past 35 years that works consistently enough to help you anticipate corrections before they happen and rallies before others see them coming.

Market timing does not work.

Understanding sentiment, on the other hand, does.

It's not a perfect science but it's the best we've got because it preys on weaknesses most investors don't know they have.

Pay attention because it will can help you identify the best times to put your money to work and those instances where caution is the better course of action.

Sentiment – Not Logic – Tells You Where Things Are Going

If you stop and think about it for a moment, tracking sentiment instead of logic (like everybody else does) makes a lot of sense.

The financial markets are a construct that embodies the collective wants, desires, and aspirations of millions. As such, they reflect emotion, which is of course driven by sentiment.

Therefore, it stands to reason that if you understand what kind of "mood" the markets are in, you can make the right moves ahead of time and gain the upper hand when it comes to building wealth.

One of the best ways to do that is via a technical tool called the "put/call ratio."

It's the only tool I've seen in more than 35 years of analyzing markets that works consistently and accurately to catch every single one of the market's major turning points since it was created.

The put/call ratio measures sentiment by calculating the difference between thousands of put and call options traded in the U.S. stock markets.

Viewed as a proportion, the ratio can be calculated on any given stock, ETF, index, or other investable instrument for which there are options traded. That means you can apply it to individual securities, too.

Generally speaking, higher readings reflect more calls being traded (as stocks fall), which suggests traders anticipate higher prices ahead. Conversely, lower readings suggest that there are more puts being traded as a hedge (as stocks rise), so lower prices could be just around the corner.

The problem is that when you look at the data in isolation, the put/call ratio resembles an EKG from hell or an earthquake tremor map, depending on your perspective.

To get around that, most traders "smooth" the data over a period of time using a moving average to get what's called a "normalized" ratio that's not so spikey as to be useless. Day traders with short attention spans seem to like 10 to 15 days. Position traders may push out to 200 days or more.

Here's what I suggest.

Start with a 20-day period, because that's a good approximation of the market cycles an average investor is going to encounter. Depending on your view of things, you can lengthen or shorten this as you wish – depending on your individual preferences.

For example, take a look at this chart that overlays the S&P 500 Index against the 20-day moving average of the put/call ratio: 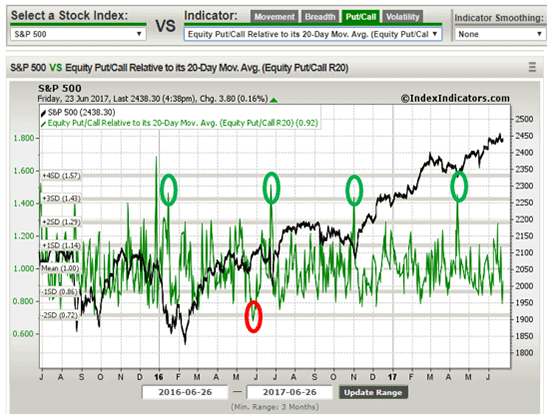 At first glance, it's a squiggly mess.

But if you relax and let the lines talk to you, a very clear picture emerges, as do a few key takeaways.

First, there have been four times the put/call ratio has hit 2 standard deviations since January 2016 – circled in green. Each time, the markets have moved higher following the bullish sentiment associated with trading more call options than put options.

Second, there has been one time the put/call ratio has hit -2 standard deviations, which I've circled in red. Each time, the markets have fallen following bearish sentiment associated with trading more put options than call options. Not immediately, mind you, but close enough for government work, as the old expression goes.

Here's the thing. Knowing how to read this chart would have:

If you're like a lot of people, you may be kicking yourself right about now because you're imagining how much more money you could have made – or could be making. That's perfectly normal (and a valuable part of learning, too).