The stock will have to appreciate 127.06% just to break even.

Dividend investors are at particular risk because the cash flow is so bad that executives may not be able to cover the $8 billion nut legions of retirees are depending on.

That anyone thinks this is a surprise at this stage of the game given the company's history simply boggles my mind.

General Electric is a train wreck of a stock and has been since former CEO Jeffrey Immelt took over from "Neutron" Jack Welch in 2001. At the time, he was viewed as a hero capable of running the legacy he inherited to new heights, but now, 16 years later, Immelt may go down as one of the single worst CEOs of all time.

Plenty of shareholders would agree.

GE's lost a staggering $400 billion worth of its money on his watch. I think it's very telling that GE's stock was worth less on the day he left than on the day he joined the company. And, unfortunately, millions of investors who've gone along for the ride have gotten clobbered.

Adding insult to injury, GE's stock is off a stunning 31.3% this year alone, while the Dow has put in a staggering 54 new record highs over the same time frame. 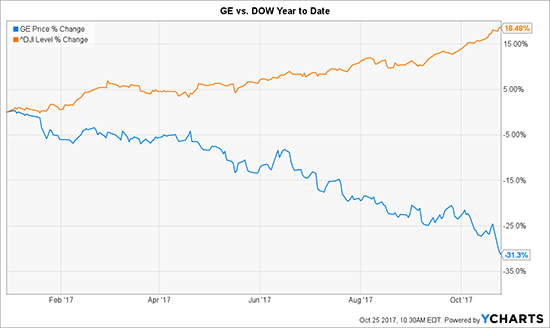 The Internet is filled with stories about why GE's a great buy at around $22 a share:

Don't believe a single one of 'em.

In fact, I think it's highly likely that GE gets dropped from the Dow, which would be the ultimate irony considering that it's the only original listing left from 1896, when the Dow was created. GE is in such bad shape that it's skewing the ratio of the highest- to lowest-priced stocks in the venerable industrial index.

It doesn't matter whether we're talking about an American icon or not.

I see very little evidence that GE executives understand how to move the company forward, which means, by implication, that they don't understand the markets within which the company operates. That's hardly a recipe for success... perhaps at the tables in Vegas, but that's a different line of thinking.

The irony, of course, is that Immelt wanted to create a simpler, far more valuable industrial company. Instead, he's leaving behind a ruined shell with no consumer presence to speak of, very little in the way of commercial product viability, and almost no development pipeline.

Wall Street, naturally, doesn't see things that way, which is hardly unexpected. They make their money by keeping you in the game, so publishing a positive spin is par for the course.

Mr. Patalon, there was a big fan of "G.E.", I suppose he didn't see this either.

Thank you for your comment and for reading Money Morning. In fact, Bill has been keeping a close eye on GE. You can read his latest insight here: https://moneymorning.com/2017/10/11/ges-biggest-cheerleader-is-getting-worried-heres-why/