You've spotted an unstoppable, trillion-dollar trend. You've identified the stock that's set to benefit most and made a trade using the tactics that will squeeze the most profit out of it.

Now it's time for the final piece of the Total Wealth strategy.

Mention the words "risk management," and most investors get a look that's somewhere between bored and terrified. It's not that they don't want to control risk; they're just not sure how, and they don't make it a priority.

Yet, the most direct path to building a fortune is not losing your money in the first place.

All you really need is a handful of tools and the discipline to enforce them.

One you're probably already familiar with is a "trailing stop." They're usually automatic sell orders set at a specific percentage below the market price of the investment you hold, or at some predetermined dollar amount of risk on a given investment. While people typically think of trailing stops as downside protection, in fact, they can be used to lock in profits, too. That's why I recommend using them on almost every investment.

But few people use what I call "Ultimate Trailing Stops."

The Most Direct Path to Building a Fortune

Before I show you the power of Ultimate Trailing Stops, we need to spend a minute talking about why risk management matters.

As I said, the most direct path to building a fortune is not losing money.

I know that sounds obvious, but it's not to the vast majority of folks.

DALBAR data shows that individual investors consistently underperform the broader markets. Over time, they fall farther and farther behind, eventually dooming themselves to terrible results that they'll never make up.

Many investors like to think that this is because they haven't found the next "Google," or "Apple," or "Microsoft." I suppose that's true on some level, but in reality, there's plenty of opportunity. So much so, in fact, that from 1993 to 2013 almost every investment sector outperformed the average individual investor who achieved an annualized return of just 2.53% over the same time frame. 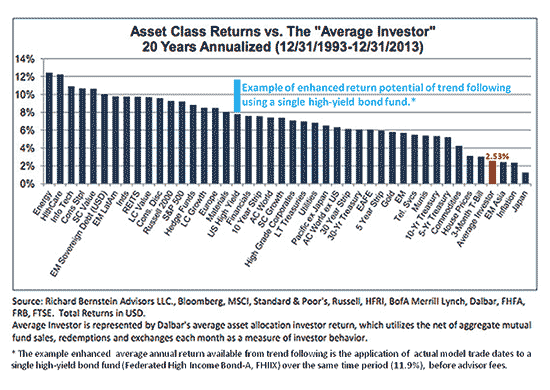 That's why I started Total Wealth.

With the six trends, the right tactics, and a few risk management tools, chances are you won't be left behind - and, in fact, you may even beat the market for years to come.

Must See: What do billionaires Peter Lynch, President Trump, and a retired cop from Northridge have in common? They've all benefited enormously from a curious Great Depression-era "program." And even though most have no idea this exists, it could be worth $68,870 or more to the average American. Continue reading…

Truth be told, there are thousands of ways to prevent losses. This isn't anything new, and there's certainly no lack of literature on the subject. In fact, a quick spin around the Internet reveals tens of thousands of articles covering everything from simple trailing stops to esoteric methods like synthetic hedging, which you'll need a PhD in astrophysics to understand. That's NOT what I'm talking about here.

What I am talking about is installing another layer between you and the proverbial "sell button."

Here's a great place to start.

How to Use Ultimate Trailing Stops

Like many investors, I want to make money every day with everything I own. I realize that's not always possible, but that doesn't stop me from trying. Chances are, you feel the same way, or you wouldn't be here.

But what matters is how I approach the markets.

From the moment I wake up to the moment I go to bed, I think about what's going to cause me to lose money. That may surprise you, but it shouldn't. Many professional traders are the same way. They know that profits will come if they can consistently identify what will cause them to lose money, and they take steps to avoid it.