Urgent Update from Keith Fitz-Gerald: We recently discovered Inspector General audits that may entitle you to thousands of dollars –even tens of thousands – in unpaid benefits. In fact, according to the most recent audit in February, 82% of specific people eligible for certain related-benefits were owed money. Most victims of these errors have no idea that they could be owed a sum that could equal $23,441. Click here to learn more before it’s too late.

I'm often asked how I know which companies to avoid – like the plague – or "sell short" in the name of big profits.

"You seem to have it down to a science," said Barbara P. and her husband, Robert, over coffee in Seattle recently…

They'd come to check out the original Starbucks Corp. (Nasdaq: SBUX) location in Pike Place Market after hearing me talk, during an appearance on "Varney & Co." a week ago, about why I think the company is in for some rough sledding in the months ahead.

"Science may be pushing it, but thank you for the compliment," I said… and I added that "the real secret is psychology."

Market psychology is the feeling investors develop that compels them to buy or sell specific stocks. It's very different than technical knowledge or even a hot tip.

What I'm talking about is the emotional driver that prompts 'em to buy or sell. The former is usually an expression of optimism, while the latter is usually a reflection of inner fear. Either way, logic goes right out the window.

The key to big profits when this happens is finding companies where the two – logic and emotion – are at odds.

The company is an unmitigated disaster and has been for decades because it missed the transition to digital photography despite the fact that it created much of the technology driving it today.

Start the Countdown: In just five days, you could have a fat check for $23,441 in your mailbox. The best part is, it's just one short phone call away. Over 80% of eligible seniors may be entitled to this cash. Are you one of them?

Not many people know, for example, that Kodak actually invented the first megapixel camera in 1986. That should have given them a huge lead because they were years ahead of the competition, but it didn't because executives failed to grasp the earth-shattering potential.

Here's another surprise… Kodak actually spent more than half a billion dollars in the mid-90s to develop the first digital preview cameras yet held back because management feared that releasing that technology would eat into the film business.

Other critical failures followed, including the misguided purchase of Sterling Drug in 1988 and a series of CEOs who just couldn't grasp the inevitability of digital images, much in the way former Microsoft CEO, Steve Ballmer, failed to understand Apple's iPhone when the late Steve Jobs unveiled it. (Which he ridiculed in this now famous clip from 2007.)

Kodak even purchased a photo-sharing site called Ofoto in 2001. That should have been an amazingly profitable springboard that allowed them to dominate today's social media a la Instagram or Twitter!

If you're like most investors, you're asking yourself… Ofoto???!!!!

Kodak has repeatedly made some really intelligent breakthroughs over the years only to shoot themselves in the proverbial foot every time.

The company's stock has fallen by more than 60.1% in the past 12 months alone and a jaw-dropping 80.7% over the past five years during one of the biggest bull markets on record.

I think it'll hit zero in the next six months.

Psychology Is Your Key to Big Profits Ahead

That's where psychology comes in.

The investing public is so preconditioned to the notion of cryptocurrencies that the merest mention of 'em causes otherwise rational investors to drool like Pavlovian dogs and to buy stocks they know damn well are worthless. And, with predictable results.

Any number of shoddy companies have instantly enjoyed a change in fortune overnight by adding "blockchain" to their name or hatching plans for some sort of cryptocurrency tangent. Then, they fall from grace as quickly as they rose.

That was the case for the unprofitable Long Island Iced Tea Corp. when it rechristened itself as "Long Blockchain" and shares jumped 289% overnight, according to Bloomberg.  The company now trades in the OTC market at $0.42 per share, having fallen 96.41% from an April 2018 peak of $11.70. 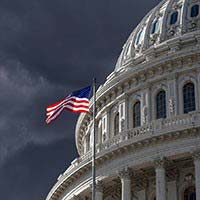 You could be eligible to collect as much as a $23,441 lump-sum check from the Social Security Administration – recent audits by the Office of the Inspector General reveal tens of thousands underpaid. Click here to learn about what’s going on.

The situation reminds me of the Dot.com era. Companies that had nothing to do with the Internet could suddenly carry multimillion-dollar valuations merely by putting out a press release saying that they intended to become an Internet company.

This is investor psychology at work, and it's why Kodak stock jumped from around $3 to $11.55 in January when management announced the company was getting into the cryptocurrency business via KODAKCoin, KODAKOne, and KODAK KashMiner. And, now, it's back to $3.73 a share, as I type.

Kodak's move is nothing more than a publicity ploy at a time when the investing public is highly likely to fall for it.

Worse, the once rock-solid company has now apparently gotten into cahoots with a paparazzi photo agency, a penny-stock promoter who's been fined $25,000 and banned from Canada's Alberta Stock Exchange, and a company offering a "magic money-making machine," according to The New York Times.

I think Kodak will be bankrupt by the end of the year (again), and no amount of digital hocus-pocus will change that. Shares are worth zippo.

First, Kodak's still a great short if you want to get in on the action.

Most of the easy money has been made, however, which means the final fall from $3 a share to $0 will be volatile. The last holdouts always hate giving up the ghost more than they hate admitting defeat.

That's actually great for our purposes because each false rally is a chance to "get short."

Second, you can buy put options – a speculative bet that Kodak's stock will fall. The advantage, of course, is that your risk is limited to the amount of money you invest versus shorting the stock itself, in which case the risk is technically unlimited.

In this instance – where the trade is based on psychology – put options are a lot like a lottery ticket. You can spend a little and potentially win a lot!

What I'd rather see you do is get on board with the next opportunity.

I'm actually researching three companies with an exceptionally high risk of financial failure right now – all of which have the kind of potential for ginormous returns we've talked about today.

And, I will be back with those in the coming few weeks.

If you're looking for another reason to be upset with the government, look no further… Audits done by the Office of the Inspector General found that errors by SSA employees have resulted in 33 years of underpaid benefits to tens of thousands of Americans.

Imagine how impactful one minor mistake can be in your everyday life; take that multiplied by 33 years… No wonder research found that Social Security recipients are leaving an estimated $25 billion dollars in the pockets of the U.S. government every year.

Denise Felton, for example, recently found out she was underpaid $56,255 in Social Security due to the same type of miscalculations.

I don't know about you, but I'm certainly not going to sit and let the government keep another cent of my hard-earned cash.

Click here to learn more about potentially claiming the money you should never have missed out on in the first place.