The possibility that electric car manufacturer Lucid Motors may merge with the SPAC Churchill Capital IV (NYSE: CCIV) is one of Wall Street's hottest stories. The deal is rumored to value Lucid at around $12 billion. This would be the largest SPAC deal for an electric vehicle stock so far. 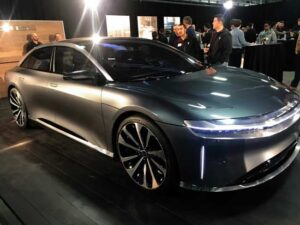 But there's more to the story here.

Let's take a look under the hood...

Why the Churchill Capital SPAC Could Be a Winner

That's important because Churchill Capital IV is said to be talking to investors to raise $1 billion by selling shares in a private investment in public equity (PIPE) deal to fully finance the Lucid merger.

Klein has the contacts to get the PIPE deal done and bring a deal with Lucid closer to closing.

Of course, even if the deal gets done, there's some risk for shareholders.

The shares of the company post-merger could be vulnerable once the deal's hype meets the reality of the stock market. Shares of Nikola Corp. (NASDAQ: NKLA), another electric vehicle stock that went public through a SPAC, soared to over $79 a share last summer only to fall all the way back to the current level of around $20 once the excitement died down.

While Nikola and Lucid both fancy themselves as upstart rivals to Tesla Inc. (NASDAQ: TSLA), there's some reason to think Lucid actually has what it takes.

Why Lucid Stock Is a Potential Buy

Lucid Motors certainly has the pedigree and the team to make waves in the electric vehicle market. Founder and CEO Peter Rawlinson was the vice president of Vehicle Engineering at Tesla. He led the team that took the Tesla Model S from an idea on paper to production.

Before coming to Tesla, Mr. Rawlinson was head of vehicle engineering at Corus Automotive, chief engineer at Lotus Cars, and principal engineer at Jaguar Cars.

7 IPOs in 2021 You Can’t Afford to Miss
Seven monster IPOs are on our radar for this year. Get all their names – including the one with the BIGGEST profit potential – in this just-released free report.
By submitting your email address you will receive a free subscription to Money Morning and occasional special offers from Money Map Press and our affiliates. You can unsubscribe at any time, and we encourage you to read more about our privacy policy.
Thank you for subscribing! Check your email to access your free report.

The vice president of design is Derek Jenkins. Mr. Jenkins was formerly at Mazda, where he designed the 2016 MX-5 Miata, Shinari Concept, CX-5, Mazda6, Mazda3, and the 2017 CX-9. Before Mazda, he was the chief designer for Volkswagen North America.

Peter Hochholdinger is Lucid's vice president of manufacturing. He was also at Tesla, and before that, he was the senior director of production for Audi's A4, A5, and Q5.

The management team at Lucid Motors knows how to build, design, and sell cars in general and electric vehicles in particular.

The Dream model delivers 1080 horsepower that can take the car a quarter-mile in 9.9 seconds at 144 mph. The Dream is said to top out at close to 170 miles per hour. The Lucid Air will be capable of traveling more than 500 miles before needing a recharge.

The Lucid Air may well be a serious rival for Tesla in the upper-end electric vehicle market.

Does that mean you should buy the stock once it's public?

Lucid has not sold a single car yet. They have orders but haven't disclosed how many. It will be a long time before they are producing and selling enough cars to turn a profit.

If you're a true believer and willing to risk some speculative capital, you can stash this away for a few years and hope to see it rival Tesla.

If you're thinking more short term, then momentum is your friend.

If you want to take the ride in shares of Churchill Capital IV, do so knowing that this is purely a momentum play. As long as traders think this will be a great deal and are piling into the shares, the stock can go higher.

Post-merger, there could still be a lot of excitement as the Lucid Air release date comes closer. It is an exciting car and is going to attract a lot of attention when it rolls out.

Enjoy the ride higher, use trailing stops to protect yourself from sharp drops, and bail at the first sign of weakness.