As my Total Wealth readers know, when I started that newsletter I highlighted six "Unstoppable Trends" - each of which is backed by trillions of dollars - and promised that we'd check in on them from time to time in the pursuit of profits.

Today, I want to keep that promise.

Not only are all the "Unstoppable Trends" fully intact, many are getting even stronger. So are the companies we're tapped into, especially when they're in sectors being written off by the mainstream investment community...

From the Editor: If you've seen Michael's new briefing, you know why we can't get enough of his research. Today, he gives you yet another reason his subscribers have been able to make so much money.

This is one of the greatest secrets of investing.

It's a strategy that I developed during my 34 years in Silicon Valley. And it will let you tap into some big, big profits for a modest amount of effort.

In fact, this very cool approach to high-tech investing will uncover a bushel of double-digit winners that your friends, co-workers, and others you talk stocks with have no hopes of finding.

Today we're going to perform a bit of high-tech detective work - peering into the shadows of Silicon Valley for profit opportunities most investors don't even know exist.

And I'll even identify the four double-digit profit plays that my sleuthing has already uncovered.

For the last four years, ordinary Americans have struggled to rebuild their wealth in the wake of the Great Financial Crisis.

Last week, the Federal Reserve Bank of St. Louis reported that the average U.S. household has recovered only 45% of its wealth lost during the recession.

Of course, the Federal Reserve won't acknowledge that its Chairman, Ben Bernanke, has been a principle driver in the underperformance of the middle class' return to financial normalcy. Bernanke has removed incentives for anyone to keep their dollars in a savings account by knocking interest rates to near-record lows.

Meanwhile, nearly 50% of Americans do not own any stocks or bonds. Given recent memories of their wealth evaporating, it's been difficult to instill much confidence for those who lost so much.

Low rates and lost confidence in the markets have left more Americans vulnerable to inflation, accelerating costs of staples, and uncertainty about their financial future.

But there is good news.

Looking for some of the best investments in metals? Don't overlook palladium and platinum, key materials used in building catalytic converters.
Demand for the metals - and prices - will take off.

We asked Rick Rule, the founder of Sprott Asset Management's Global Companies unit, to explain why.

Rule told Money Morning in the following interview the prices will rise partly because demand for palladium and platinum will grow as a result of what's happening in the automobile market in China, now the largest automaker in the world.

Investors who bought into uranium at the right time in the 1970s probably considers it one of the best investments they've ever made... 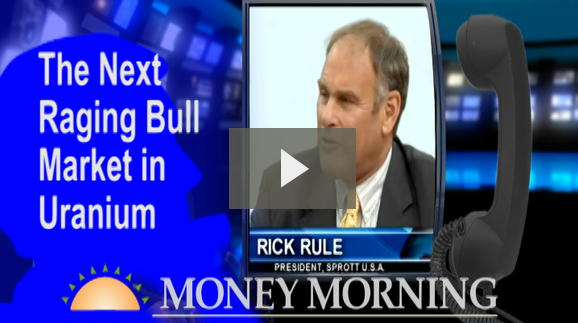 Now the stage is set for uranium's price to go on another tear...

To find out why uranium could be one of the best investments over the next few years, we turned to Rick Rule, founder and chairman of Sprott Global Resources Investments.

Innovation is the mother of lucrative investing, and nowhere is that truer than in biotech - which delivers some of the best investments you'll ever find.

Biotechnology provides breakthrough products and technologies to combat debilitating and rare ailments, it reduces rates of infectious disease, tailors treatments to individuals to minimize health risks and side effects, creates more precise tools for disease detection, and it reduces the odds of global life threatening conditions.

In short, biotech helps to heal the world.

"If you're looking to double your money, the biotech sector is one of the best hunting grounds that you'll find," writes Money Morning Tech Specialist Michael A. Robinson, who regularly follows the industry's best investments for his Strategic Tech Investor members.

The best investments (2013) can be found overseas and in the United States, if you know what to look for. Frank Holmes explains. Read more...

The best investments can offer reward far greater than risk. Here are some that are not for the nervous, but could deliver five-fold gains. Read more...

Aliko Dangote is the richest man you've never heard of.

The 56-year old native of Kano, Nigeria is a self-made business magnate, with a net worth of more than $16 billion.

With boom times ahead for Africa, Dangote is leading the continent's headlong charge into infrastructure building and resource exploration.

A person of vision and drive, he's well suited for the unfolding boom, and all the opportunity it offers.

As the African Century moves into its second decade, Dangote is still very bullish on Africa-- making - and keeping - most of his fortune there.