I've been following one of the biggest "stealth" stories of the year: the rise of China's yuan as it gears up to take its place on the world stage.

Towards this very goal, China has taken steady, calculated steps for some time.

It's also no secret that China and Russia have a "special relationship" that will drive this trend.

China is likely to help its neighbor in this time of need, and the longer-term global implications could well be dramatic...

The euro is falling. Our 2015 euro forecast sees little changing over the next year - and for some time after.

Confidence in the euro is weakening. And the reasons are piling up against the falling currency.

If you don't want to miss out on Japanese profits, you'll want to find the best investments for a falling yen.

A recession and heightened easing activities from the country's central bank will provide investors with many gains in the coming months.

Just about everyone knows Alan Greenspan. As central bankers go, he may just be the most famous ever. Even today, 1 in 6 Americans still think he's the current chair of the Federal Reserve.

As Fed chief from 1987 until 2006, Greenspan oversaw the latter part of the greatest stock bull market in history.

For that, some called him "The Maestro."

From other quarters, the names are far less flattering. Many blame him for inflating massive stock and real estate bubbles, resulting in financial devastation across the economy.

Well, these days Greenspan is acting rather schizophrenic. In fact, you won't believe what he's saying now, unless you understand where he's coming from.

Given the havoc its wreaking on market stability (while ostensibly doing the opposite), it's absolutely critical to look back at Greenspan's handiwork to try to make sense of today's Federal Reserve maneuvering...

The rising U.S. dollar has climbed to a four-year high - but will it continue?

In this video, Fitz-Gerald takes a detailed look at the rising U.S. dollar and what it means...

Make no mistake about the U.S. dollar's recent strength; the long-term health of the world's reserve currency is still as precarious as it ever was despite the recent pick-me-ups it's received in foreign exchange markets.

Here’s why the U.S. dollar is rising now – but won’t be forever…

Most everything you’ve heard about China’s currency, the yuan, is dead wrong.

It’s not undervalued and it’s not undercutting the U.S. dollar. In fact, it’s setting up a boon to U.S. stock investors.

You see, the yuan used to be a cheap currency before 2008. But this changed after the Chinese government responded to the global recession with massive stimulus investment spending. Driven by the greatest construction spree in history, Chinese banks lent out trillions and the country’s money supply grew three times as fast as the U.S. money supply.

Since then, the yuan has lost 60% of its value. And it’s setting up a massive real estate bubble.

Now let me show you how and when this scenario will push up U.S. stocks...

Sure, the U.S. dollar has been rising – but that will end. So, here’s your all-star list of the best currencies to invest in for 2013. Read more...

If you want to know how to profit from the currency war, just look to Japan. 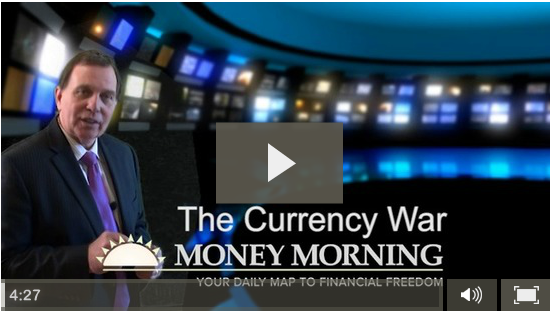 That's because Japan's aggressive move to cheapen the yen in order to stimulate its own economy is working.

Of course, Money Morning's Chief Investment Strategist Keith Fitz-Gerald predicted this would happen months ago, and he was dead on.

But even if you missed the first moves in this currency war, it's not too late to profit.

To hear Keith explain how investors can still take advantage of the "race to the bottom" and profit from the global currency war,

It’s the Yuan’s world, and the West is just living in it.
It’s no coincidence that Yuan-settled trade jumped 41.3% - to nearly three trillion Yuan - in 2012, after it increased by more than 300% in 2011.
In fact, since June 2005, the Chinese Yuan has risen 24.66% against the U.S. dollar, backed in part by 1.3 billion consumers and real assets. To borrow a tech term, China's currency is the world’s new “killer app.”
Here’s how you can make it part of your investing future…

The great currency risk right now is not the "race to the bottom" you hear about, but a full-blown 1930s-style currency war.
This is not front-page news yet, but I have a sneaking suspicion it will be shortly...
It's going to blindside Washington and most of Europe, where central bankers, politicians, and economists fail to recognize that events from nearly 100 years ago are now primed to repeat themselves. Worse, it will devastate an entire class of investors who have put their faith in the current economic dogma of endless bailouts and money printing.
I'll explain what happened in 1931 in a moment. But first, ironically, this currency war won't start because of international problems. Instead, it will be touched off in earnest because of domestic concerns - only not American ones.
Here are three reasons I think Japan will fire the first shots.

If 2011 taught us one thing, it's that currency investing can be a dangerous business.

For instance, the euro - the simplest of hedges against a declining dollar and the U.S. Federal Reserve's expansive monetary policy - has run into difficulties, losing billions for even the most sophisticated Wall Street banks.

But that's not all. The Brazilian real, which was one of the best performing currencies of 2010, has dropped back sharply in 2011.

Still, if you harness the lessons of 2011, you can take advantage of the new opportunities set to emerge in 2012. In particular there are three currencies every investor should own.

I'll get to those in a moment. But first, I'd like to fill you in on what currencies to avoid.

This is just as important - maybe even more so.

Obviously, the euro is not to be trusted. If its problems were confined to Greece and Portugal, they would be surmountable.

The extension of problems to Italy and Spain, which are both too large to bail out, makes the Eurozone liable to explode, split in two, or simply witness a mass default of several of its countries and much of its banking system.

But the euro itself? No thanks.

The Japanese yen isn't safe either.

Unlike most other currencies, the yen has risen more than 50% against the U.S. dollar since 2007 and is up another 6% since the beginning of 2011. In short, it has done what President Obama would like China's yuan to do.

Needless to say, Japanese exporters are suffering at these levels, and the country's government debt, over 200% of gross domestic product (GDP) and all denominated in an appreciating yen, has become a serious worry. While the yen could rise further, it must be regarded as very unsafe.

The pound sterling is equally unsafe, but for different reasons.

The British government is running a budget deficit as large as that of the United States, while the British economy is highly dependent on the very unstable and overblown financial services sector.

For the past 30 years, my grandfather has been living the retirement dream, thanks to a few strategic stock plays.

Here's the interesting part: My grandfather never knew a thing about stocks. He didn't know how to value them, or when to buy and sell.

But he did know the power of income.

You see, as a child of the Great Depression he saw stocks differently than we do today.
His generation didn't buy stocks for the possible capital appreciation.

Instead, they bought stocks based on the dividend yield - and the consistency of that dividend.

They had lived through uncertain times, so they only trusted investments that offered fairly certain income.

That's why now, as we find ourselves back in uncertain markets, you want to make sure your portfolio includes interest-bearing and dividend-yielding assets.

Which means my grandfather's strategy is worth copying.

How to Live Comfortably During Uncomfortable Times

My grandfather started with certificate of deposits (CDs) in the late 1970s and early 1980s. These were the high-interest days, so these CDs paid 16% to18% interest. He got that nice, passive "certain" income for as long as that party lasted.

Then once interest rates dropped and all his CDs matured, he looked for the next round of certain income. He had just retired from the telecom industry and believed AT&T Inc. (NYSE: T) was a good long-term play.

Best of all, AT&T paid a 6% dividend yield. So he wisely invested his CD income into AT&T stock and then sat back and waited.