Well before we reach the day when Twitter goes public, the Wall Street hype machine will be running at full tilt.That's going to make it hard for some to resist jumping on the Twitter bandwagon. But before things start to get too crazy, there''s something you need to know... 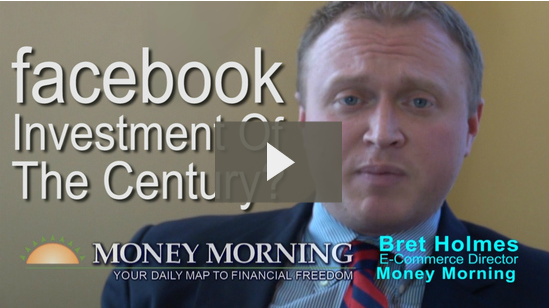 Facebook Inc. (Nasdaq: FB) is starting to get a taste of what it means to be the king of the social media hill.

Small and more nimble competitors with novel ideas have sprung up and begun to entice young users away from the No. 1 social media platform - a bad omen for Facebook stock, which 11 months after its IPO still trades 29% below its offer price.

According to Piper Jaffray's annual "Taking Stock of Teens" survey, teens are spending less time with Facebook and more with a vast array of alternatives.

Down about 42% from the $45 high after its initial public offering, Facebook stock (Nasdaq: FB)needs a way to keep investor interest into 2013.

How about paying a dividend?

That's because on Dec. 12, shares of the world's largest social networking company will be added to the Nasdaq 100 Index.

Snagging a spot in the coveted index, a compilation of the 100 most valuable non-financial stocks traded on the Nasdaq, is the latest in a string of welcome news for Facebook shareholders, especially those bruised in its initial public offering fiasco on May 18.

And the news couldn't have come at a better time for shareholders.

Zynga Inc. (Nasdaq: ZNGA), creator of FarmVille and other popular social games, has had a special business relationship with Facebook Inc. (Nasdaq: FB) for years. But now it's over.

Facebook stock finally has been acting like it was expected to after its hugely hyped initial public offering in May: It's rising.

In a stark about-face, the stock has advanced more than 24% in November, after falling 50% from its IPO price over the previous five months.

The FB rally was pronounced Monday, with shares of the social networking giant closing up 8.09%.

In addition, it has logged better returns than the S&P 500 by 24 percentage points over the last 60 trading sessions.

Facebook (Nasdaq: FB) is a drain on the U.S. economy.

No, we're not talking about Facebook's IPO fiasco earlier this year and the subsequent stock price meltdown. It's bigger than that.

Facebook is worst offender among the many Internet distractions keeping workers from getting things done in the office.

Most workers stop what they are doing several times an hour to respond to messages from friends and co-workers on social media like Facebook and Twitter, browse the Internet, and check and respond to e-mail.

And once distracted, it takes time for a worker to get back to the task at hand - one study put the average disruption at 23 minutes.

All those interruptions add up to a massive expense for businesses and the U.S. economy.

The market has been buzzing about the fact that three top executives of Facebook have taken their first opportunity to sell some of their stock in the social networking company.

The sales were part of 230 million shares awarded to top executives and employees prior to the IPO that were subject to lockup until last week.

Facebook stock (Nasdaq: FB) was up almost 10% in the first 30 minutes of after-hours trading today (Tuesday) after the release of its third-quarter earnings report, its second as a public company.

Releasing earnings after market close, the social network leader posted earnings per share of 12 cents, on revenue of $1.26 billion, or 32% higher than the year-ago quarter.

While Facebook did not provide an outlook following its uninspiring second quarter release, analysts were looking for 11 cents per share on revenue of $1.2 billion, according to data from Thomas Reuters.

The third-quarter Facebook earnings report will come out Oct. 23 after the markets close, and the results are looking increasingly dismal.

Despite a recent milestone (one billion users), a new "want" button feature and a "pay-to-promote post" option, the company has failed to drum up investor and analyst fanfare.

Wall Street shrugged off all of the recent news and Facebook (Nasdaq: FB) stock barely budged, except to move a little lower.

Even CEO Mark Zuckerberg's mid-September interview, which appeared to put some spark back into Facebook's fading shares, now seems like a very distant memory.

Facebook Inc. (Nasdaq: FB) rolled out a business-friendly interactive tool for its massive user base on Monday with the launch of a "want" button.

But, what Facebook will get from the "want" button is unclear.

Still in the testing mode, the new feature allows Facebook members to create "wish lists" of desired items ranging from home furnishings to clothing to books to a bevy of other retail products. It's kind of like a Christmas list or bridal registry.