If you can handle the ups and the downs, Frank Holmes explains why the drivers for higher gold stocks remain intact. Read more...

The CFTC's summary of trading positions showed bullish investors returned to the gold market last Tuesday, when the data was compiled. The increased long positions came on the heels of gold's largest one-day sell off in 30 years.

Gold prices were up today (Thursday) as the U.S. dollar retreated against other currencies, leading foreign buyers to favor investing in gold. 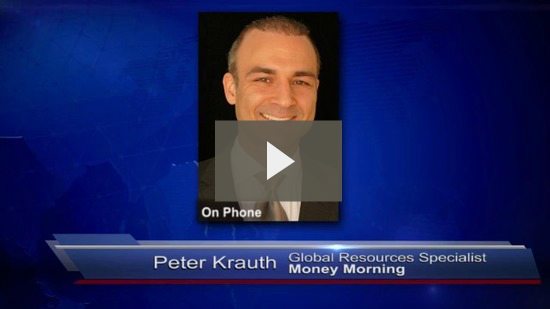 The most actively traded gold contract, for April delivery, rose $2.70, or 0.1%, to settle at $1,590.70 a troy ounce on the Comex division of the New York Mercantile Exchange.

"The gold market is getting propped up by a break in the dollar index," Ira Epstein, director of the Ira Epstein division at the Linn Group, told The Wall Street Journal. "The problem is, people are not buying into the rally, they're buying it on the dips."

If gold prices cross the psychologically important $1,600-an-ounce level, confidence in investing in gold could strengthen.

Until then, it looks like investors will stay busy trying to profit from the record-high Dow.

Gold prices have been languishing in recent weeks, as investors have been drawn into riskier assets, like equities. Investors are not looking for a "save haven" right now. But not everyone is shunning gold - and you shouldn't either. Take a look.

If you’ve ever suspected gold prices are being manipulated, you’re right, they are.
Against the backdrop of fiscal mismanagement, political incompetence, and failed austerity measures, the world's biggest traders have all bet heavily on gold. Lately, they've been pulling out all the stops to get what they want (while laughing all the way to bigger bonuses).
Today, I want to talk about who "they" are and share a few tricks you can use to capitalize on their actions without being taken to the poorhouse.
Here's how to play the game to win.

Now we know what Russia has been doing all these years with all its oil mega-profits: investing in gold.

A Bloomberg News article Monday reported that Russia's central bank added 570 metric tons of gold in the past decade, making the country the world's biggest gold buyer. That amount is a quarter more than the world's second-biggest buyer, China.

The amount of gold Russia added to its stockpile is almost triple the weight of the Statue of Liberty, according to Bloomberg.

It certainly makes sense for Russia to add to its official gold reserves. Gold prices have gained about 400% over the past decade.

"The more gold a country has, the more sovereignty it will have if there's a cataclysm with the dollar, the euro, the pound or any other reserve currency," Evgeny Fedorov, a lawmaker for Putin's United Russia party in the lower house of parliament, told Bloomberg in a telephone interview in Moscow.

After spending more than 50 years in foreign hands, Germany's gold is finally going home.
The Bundesbank (Germany's central bank) is the second-largest gold holder in the world. And it wants at least half of its gold to be held in its own vaults. That's going to mean moving 54,000 bars of the shiny metal.
But why does Germany want its gold back, and why now?
Part of it has to do with pressure from a grassroots group led by a group of economists, business executives, and lawyers, along with the German Precious Metals Association, who have put together a "Repatriate our Gold!" campaign.
But that's only part of the story...

Expectations for gold prices just grew brighter due to a recent outlook on production numbers.

Gold producer Iamgold Corp. (NYSE: IMG), which has mines in Canada and Mali, forecasts gold prices will soar to a record $2,500 an ounce as global output peaks and ore grades decline.

Grade is the relationship between quality, tons, geometry and depth that indicates if a gold find can be extracted at a cost that makes doing so profitable. High grade is key in a gold deposit.

Iamgold CEO Steve Letwin told Bloomberg News in a Jan. 10 interview that the industry has exploited its best-quality gold reserves and as a result is tapping lower-grade and higher-cost deposits.

In fact, he sees this as a sign of "peak gold" - when the maximum rate of global gold extraction is reached.

"I really think we are at Peak Gold. Nobody has seen the kind of production profiles they thought they were going to see," Letwin explained.

What is Peak Gold?

After peak gold is reached, there's a terminal decline in the rate of production.

The "peak gold" theory mirrors the "peak oil" theory, which maintains the earth holds a finite amount of crude, and production will eventually outstrip supply.

The peak gold phenomenon was actually spotted several years back.

Barrick Gold (NYSE: ABX) CEO Aaron Regent told The Daily Telegraph in 2009 at the Royal Bank of Canada's annual gold conference "there is a strong case to be made that we are already at peak gold."

"Production peaked around 2000 and it has been a decline ever since, and we forecast that decline to continue. It is increasingly difficult to find ore," Regent said.

In 2001, the world saw what was believed to be record global gold production of 2,649 tons.

And what has happened since then in gold production supports the peak gold theory...

Gold prices in 2013 are already expected to top $2,200, and adding fuel to that price surge is an accelerating trend in the global economy.

The term currency wars describes a race between many of the world's central banks to make their currencies worth less relative to other currencies, with the goal of increasing exports by making them cheaper.

Such a strategy becomes less effective as more countries join in the battle, but a growing currency war has another effect that investors can exploit: As central banks devalue their currencies, they create inflation and cause hard assets like gold to rise against them.

Fortunately for gold investors, most of the world's central banks, from the U.S. Federal Reserve to the Bank of Japan, are expected to further step up their currency devaluation in 2013.

"Implementation of the European Central Bank's Outright Monetary Transactions, andfurther Bank of Japan easing -- both of which we expect - [will] support gold, aswould a weaker outlook for the yen, which competes with gold as a flight-to-qualityasset," wrote UBS analyst Edel Tully in a recent research note.

Why Currency Wars Will Get Worse in 2013

While the central banks' easy money policies have been aimed at stimulating their own sluggish economies, the effect has been to strengthen other world currencies, particularly those in emerging markets.

That has made their exports more expensive, hurting their economies. And they've had enough.

"Advanced countries cannot count on exporting their way out of the crisis at the expense of emerging market economies," Brazilian Finance Minister Guido Mantega said at an International Monetary Fund Meeting last week. "Brazil, for one, will take whatever measures it deems necessary to avoid the detrimental effects of these spillovers."

Emerging economies are also uneasy about the recent election of Shinzo Abe as Prime Minister of Japan. Abe and his Liberal Democratic Party are expected to push for as much as $120 billion of stimulus spending plus call on the Bank of Japan to print piles of yen.

"It's almost obscene what they're talking about doing," John Mauldin, chairman of Mauldin Economics, told The Daily Ticker.

Recently, a major event was held that sent a signal to anyone interested in investing in gold.

However, the site choice should not come as a surprise to anyone following the gold market. China has become more and more important to the gold market. The Asian giant's imports of the shiny yellow metal have become a key factor in gold's positive price performance over the last few years.

Bullion demand from China has soared in the past several years.

What the WGC numbers don't tell you about though is how China's central bank, the People's Bank of China, is buying gold. Gold imports into China via Hong Kong (the route the central bank uses) has continued to rise rapidly despite a dip recently in gold buying by Chinese consumers.

Hong Kong has seen on average about 65 tons in gross imports of gold per month. Year-to-date China has imported an astounding 582 tons of gold, more than the official holdings of another country well known for loving gold, India.

It is not shocking that the Chinese central bank is trying to get its hands on large amounts of the precious metal.

As David Gornall, chairman of the LBMA, told the conference "The country [China] has only 2 percent of its reserves in the form of gold." He added "that allocation can only go in one direction."

On news of a second term for U.S. President Barack Obama, investors didn't show any excitement as the market fell 2.3% the day after Election 2012.

The fiscal cliff countdown has come to the forefront of concerns this week, helping push the Dow Jones Industrial Average down more than 2% since last Friday.

But for gold prices, this could be a good thing.

Here's how the fiscal cliff will affect gold prices as Washington battles over how to solve the looming threat to the U.S. economy.