Editor’s note: At the American Cannabis Summit – the first-ever nationwide event for cannabis investors – former Speaker of the House, John Boehner, revealed why he’s going ALL-IN on marijuana… And exactly how ordinary Americans can make a fortune from this hundred-billion-dollar industry. To see a special rebroadcast of this historic event, click here. 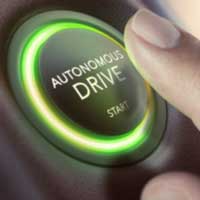 It's a great time to be an investor. From new medicines to new ways to communicate, there are massive investing trends taking hold right now.

One of the most visible is at the intersection of transportation, computers, and clean energy: autonomous electric cars.

With over 1 billion "regular" passenger cars on the roads worldwide, a lot of gasoline is being burned and carbon is being emitted every day. And Green Car Reports expects that to double by 2035.

But reducing carbon emissions is only part of the story. Autonomous, or self-driving, cars are making great inroads with navigation and safety. Indeed, analysts now forecast that the market for self-driving autos will grow tenfold, to $556 billion, in less than a decade.

With a market that huge, savvy tech investors would do well to get involved. That's why we're bringing you the best stock to buy now to capitalize on this market.

While fully autonomous travel is still in the advanced testing phase, consumers are already benefitting from semi-autonomous vehicles. From automated parking to automatic braking to Google's automated mapping car, the technology is already in place.

Don't worry about losing total control of human-operated vehicles. More likely, we'll see a hybrid system first where cars and humans work together. But with autonomous Ubers and delivery services, fully autonomous vehicles are clearly in our future.

And it will be an incredible boon for tech stocks, like the one we have for you today. Here's one of the best stocks to buy today…

When we think about self-driving cars, Tesla Corp. (NASDAQ: TSLA) is the name that first comes to mind for most people. Others will talk about Waymo, a division of Google parent Alphabet Inc. (NASDAQ: GOOGL), which already logged 10 million miles on self-drivers.

But that's not where the best investment lives, says Money Morning Defense and Tech Specialist Michael A. Robinson. It's not a car maker, but its products are part of the brains of self-drivers.

NVIDIA Corp. (NASDAQ: NVDA) is one of the great backend plays in this red-hot market. Many investors still think of it as a leading maker of graphics cards for video game consoles, but it is so much more. With a strategy of partnering with automakers, it will provide a wide array of advanced tech tools that will underpin a fully autonomous driving experience.

It combined its own development with advanced mapping software, sensor suppliers, research shops, and more to ensure that its Drive AGX platform is second to none across the board.

Drive AGX is a scalable, open-computing platform that serves as the central nervous system for autonomous vehicles.

Nvidia's auto partners include Volkswagen AG (OTC: VLKAF), one of the world's largest automakers, which is making a push into both electric vehicles and self-driving cars over the next few years. All of its autonomous driving work twill go to NVIDIA.

And Daimler AG (OTC: DDAIF) already rolled out an NVIDIA-powered AI cockpit in some of its Mercedes-Benz autos.

Nvidia's efforts are already paying off. Sales have shot up from $5 billion in 2016 to nearly $10 billion last year. And by next year, NVIDIA will approach $15 billion in sales. Profits are poised to rise 52% this year.

Not bad for a company and industry that has still not reached its potential growth trajectory.

Revenue comes from more than just autonomous cars. NVIDIA is at the cutting edge of exciting new markets like artificial intelligence (AI), virtual reality, and machine learning. And it makes a pretty mean gaming chip, too.

Thanks to the stock market's recent turmoil, much of it stemming from China's slowing growth, Nvidia stock is down about 20% from its peak earlier this month. Robinson thinks that based on the company's earnings growth – and all the innovative fields it's just beginning to get into – that the stock could reach $400 in just 12 months. That's a gain of 81.0% from its recent close at $221.06.

That should crush the S&P 500's gain and potentially put big money in your pocket.

4966 Reads
The Best Penny Stocks to Own Right Now – 185% Profit Potential
The best penny stocks to own are the highest reward for the lowest risk. And there are preferably a lot of insiders buying up shares in good faith. Then I can trust the high analyst projections - like the 185% growth target on our top penny stock today.