Thank you for joining the Total Wealth family. Please enjoy your free report below. 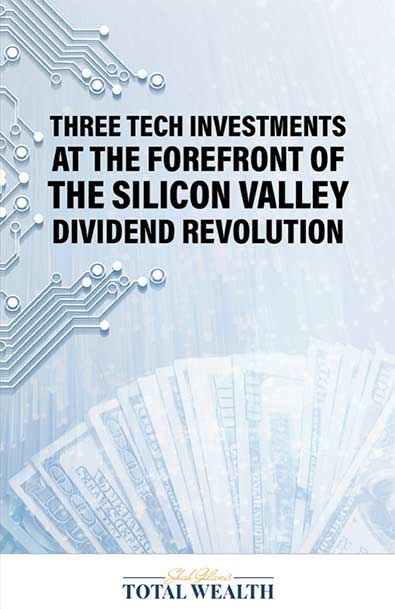 I talk to thousands of investors every week about the best and newest moneymaking strategies the markets have to offer.

Whether those investors are already my subscribers, folks at conferences looking to gain an edge, or just my friends, family, and neighbors, almost all of them are focused on one thing.

It's scary putting your hard-earned money into a market like today's… make no bones about it. I feel the angst sometimes, just as I'm sure you have.

Among Wall Street computerization, rapidly growing leverage, and more money in volatility-creating ETFs than ever before, it's more difficult than ever to find steady, stable, cold-hard cash.

However, over the past few years, we've started to see a new trend developing… and in Silicon Valley of all places.

And no, not a new, fancy-pants, "nice to have" widget. We've seen where focusing on that kind of stuff lands us with companies like Peloton Interactive Inc. (NASDAQ: PTON) or Uber Technologies Inc. (NYSE: UBER).

The name of this game is income. We're seeing a pronounced shift to true dividend payers in Silicon Valley.

This was a territory once claimed by huge utility or consumer discretionary companies – those like American Water Works Co. Inc. (NYSE: AWK) or Procter & Gamble Co. (NYSE: PG), for example.

But now, tech's joined the crowd – and this could mean steady income AND huge capital appreciation.

High-tech firms are now becoming some of the best dividend stocks to own, even as they retain explosive growth potential. These highfliers have built up troves of cash since the end of the global financial crisis, and they're facing pressure from activist investors to spend it.

Many of these firms have profit margins well over 20%. Cash stored overseas – several hundred billion's worth – is flowing back into home coffers, thanks to U.S. President Donald Trump's $1.5 trillion in tax cuts for corporations.

And it might not surprise you to learn that the best tech firms shelling out dividends are on the road to becoming what I call Silicon Valley Aristocrats. A "dividend aristocrat," of course, is a company that has increased its dividend at least annually for 25 consecutive years.

Just imagine what's required for a firm to prosper and pay back its shareholders year after year, through sector volatility, broader recessions, occasional wars, and challenging political upheavals. Persevering through all of that volatility and managing to increase dividends despite it all is no small feat.

Tech stocks generally outpace the overall stock market. The Nasdaq Composite is up 131.4% over the past five years – compared to just 51.24% growth in the S&P 500 and 42.72% growth in the Dow over the same time frame. That means you're getting significant share-price appreciation along with your cash with Silicon Valley's best dividend payers.

So seeing these tech firms enter the dividend aristocrat family is great news for investors like you. Not least of all because prime dividend-paying stocks tend to hold up better during times of low growth or stock market volatility – and that cash can serve as a cushion when stock markets are volatile.

Even if the markets do have an inherently upward bias, the rapidly increasing computerization I was just talking about will make sure that the moves aren't as… smooth… as you and I would like.

Now, as we look at some of these Silicon Valley Aristocrats, it'll pay to keep some key factors in mind.

For starters, it's important to clear up one misconception many investors have about tech stocks. They often think revenue growth and share price appreciation are the only factors worth considering.

But, as important as growth is, if you ignore dividends and the cash they create, you're missing an important part of what's happening with tech today. Because they have so much cash on hand, they're now linking their growth to shareholder payouts.

Tech companies were among the sectors that paid more in dividends among S&P 500 companies in recent years. In fact, in the past decade, tech firms grew their dividends by about 17% to $88 billion.

But here's the thing that Wall Street won't tell you…

When you see that the right company "only" yields one or two percentage points, don't worry a bit about that rate. Instead, pay attention to whether the company has been increasing whatever amount you're looking at year after year, through changing markets and business challenges…

Until you're ready to start collecting the cash.

Even for younger investors, it pays to add budding Silicon Valley Aristocrats to your core long-term holdings, because the compounding over time can be huge. Dividends that are growing by 7% a year, for example, will double in a decade.

To get started, let's take a look at three fast-growing tech plays with accelerating dividends.

You can't put together a list of great dividend-paying tech companies without including the biggest market-cap stock of all time.

Yes, Apple Inc. (NASDAQ: AAPL) has come under pressure recently because of its pronounced shift "beyond the iPhone" and into its services segment for real profits. Even if I think that shift could be more lucrative ever – and we're even seeing signs of it now with the move into medical devices and the joint credit card it's creating with Goldman Sachs Group Inc. (NYSE: GS) – Apple remains a cash machine with $69 billion on hand and a steady dividend.

Truth be told, Apple has become one of the more shareholder-friendly firms around – in tech or any other sector.

Of course, when you post the kind of numbers Apple did in its most recent quarter, you have the kind of cash flow that mints money for shareholders.

Q4/2019 results, announced on Oct. 30, was the eleventh straight quarter of rising revenue, which came in at $64 billion.

Even better for the long haul, Apple keeps ramping up its services. The company has suggested that it may be able to generate as much as $50 billion for that segment by 2020.

It's well on the way to doing so. The services have become one of Apple's biggest growth engines based on demand for subscriptions to iCloud storage, the music streaming service, and offerings such as Netflix and HBO through iTunes and Apple TV.

Service sales in the quarter hit an all-time high of $13 billion, a yearly increase of 18%. That means two things…

Now, Apple's dividend is relatively new. So, we don't have the kind of long-term growth we've seen from the other four firms. However, it's still growing at 33.8% – so that's why it's made my list.

Over the past 50 years, it's racked up an incredible 4,700 patents for its analog and mixed-signal semiconductors.

I'm talking about Analog Devices Inc. (NASDAQ: ADI), a leading maker of chips and sensors and a venture that has a long record of innovation.

Just look at what the company is doing with BlackBox Biometrics Inc.

We've all seen the heightened attention being paid to brain injuries – particularly concussions. From high school lacrosse players to NFL quarterbacks, scientists and doctors are studying brain injuries like never before. BlackBox makes sensor systems that can measure the concussive forces that cause traumatic brain injuries in soldiers or professional athletes.

Both its Linx Impact Assessment System and Blast Gauge System use ADI's microelectromechanical system (MEMS) inertial sensors. MEMS are specialized sensors that integrate circuits and sensors on a tiny microchip with a built-in central processor. These sensors can collect and measure data relating to sound, motion, force, humidity, temperature, pressure, and axis of rotation.

And then there's Analog Devices' breakthrough in drones. It helped drone leader DJI make aerial-camera drones that can send back real-time video – even when flying through the most rugged, remote environments on Earth.

First responders use drones to monitor natural disasters. The military uses them to watch and attack enemy combatants. DJI's drones rely on Analog's MEMS gyroscopes and accelerometers to stay in the air.

Gyroscopes allow our mobile devices to be maneuvered in every conceivable way – while keeping the viewing screen level. Accelerators track speed, gravity, tilt angle, incline, rotation, and vibration. As it turns out, what's good for smartphones is good for drones.

Analog Devices is the world leader in the analog-, mixed-, and digital-signal processing integrated circuits (ICs) used in just about any type of electronic equipment you can think of.

Virtually every wireless call, text, picture, or download today passes through one of the firm's chips.

And it's the authority on signal processing for wireless-network gear. CEO Vincent Roche believes the number of 4G subscribers and the bandwidth used per subscriber will double his firm's sales in communications infrastructure to roughly $4 billion by the end of 2020.

There's also industrial automation, which accounts for 47% of revenue. Its technology can be found in field instruments, motor controls, and robotics.

And that bodes well for long-term growth.

Before They Were Stocks: Stock picks are great – but the big money is made before companies go public. Now, you can access these opportunities just like the ultra-wealthy always have. We've made it easy – read how to get started.

ADI knocked the leather off the ball on its Q3/2019 earnings report – and showed continuing growth. The company beat analysts' expectations on adjusted actual EPS by $0.04, and that represented its 20th consecutive quarter of beats.

What's even more, the company has grown its gross quarterly revenue 97.89% over the past three years, which has led to an extraordinary spike in gross quarterly profits of 103.5% – to $1.04 billion.

And, to me, this is a true Silicon Valley Aristocrat.

With 15 consecutive years of annual dividend increases, its record is more than respectable. It's commendable.

With all this in place, we should be seeing share-price and dividend appreciation on Analog for decades to come.

Silicon Valley Aristocrat No. 3 – This One Covers the Waterfront

This exchange-traded fund (ETF) is entirely composed of technology and telecom firms. Specifically, semiconductor firms make up 29% of the fund, software firms 14.3%, hardware and storage 13.2%, and telecom firms 12.4%.

TDIV has $1.04 billion in total net assets spread among 92 top tech dividend payers. To be included, a stock must have a market cap of more than $500 million and have paid a dividend in the past 12 months.

The 30-day SEC yield of this ETF is an extraordinarily high 2.46%, and income is paid quarterly to shareholders. In addition, the annual expense ratio of TDIV is at a modest 0.5%, or $50 for every $10,000 invested.

On Your Way to Becoming a Silicon Valley Millionaire

The bottom line here is that these Silicon Valley Aristocrats give us two areas of growth in a single stock: cash income and share price appreciation.

Tech is the most dynamic sector in the marketplace today. And despite what the "big thinkers" on Wall Street would have you believe, the tech revolution is closer to its beginning than its end.

These great plays will be there, year in and year out, driving innovation forward.

Plus, their dividends mean they'll be home to the easiest money you make in stocks. And if you reinvest the dividends, you can grow your portfolio through the "magic" of compounding.

Consider this: From 1940 through 2011, dividends and dividend reinvestments accounted for more than 90% of the S&P 500's total return during that time.

These are three opportunities in fast-growing industries that pay you above-average income.

Get started on your Silicon Valley Millionaire Plan now.