Access Your Profit Alerts
Sign Up for Money Morning and get your free report:
"The Best Stocks to Buy Now"
How to Buy Bitcoin
Twitter
Stocks: BABA

China's "One Belt, One Road" Initiative isn't just a $1 trillion dollar plan to improve trade routes to China; it's also an ambitious attempt to reinvent China as a global economic power. 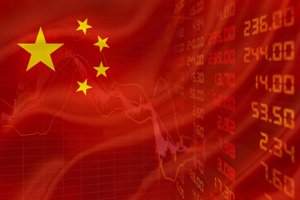 Money Morning Chief Investment Strategist Keith Fitz-Gerald says the Belt and Road Initiative, as it's also called, "will create an entirely new batch of millionaires within the next five years."

"And I want you to be among them," said Fitz-Gerald.

That's right; Fitz-Gerald is giving us his top China stock pick today to help investors take advantage of the massive profit-making potential of China's One Belt, One Road plan.

Because China's plan is already underway, now is the time to act. However, the mainstream media is just starting to cover their progress. That means investors have little time to wait to buy in if they want to reap once-in-a-lifetime profits from this opportunity.

Fitz-Gerald has been following China's attempt at developing their new Silk Road since 1997, and he says investors need to act right now.

"Not tomorrow. Not next month. Not next year. Today."

Fortunately, our readers will know exactly how to invest to profit from the One Belt, One Road Initiative. This is a can't-miss event, and Fitz-Gerald's pick could bring you over 40% profits by the end of 2017 alone…

Why Is China's Belt and Road Initiative a Big Deal?

China's One Belt, One Road Initiative is touted as a trillion-dollar investment by China to create additional and bigger markets to trade with.

The Belt and Road plan will connect economies across Asia, Europe, and Africa to China's economy through the building of new roads, tunnels, bridges, and ports. The countries involved account for more than a third of global GDP and nearly two-thirds of the world's population.

Trending: The Best Stocks to Buy (and When to Sell) for Mega Profits in 2017

By developing infrastructure to connect this huge economic zone, China hopes to boost its economic growth and compete with the United States as a global economic leader. That's why sources like The New York Times reported last month (May 13) that China is investing over $1 trillion into the plan.

One Belt, One Road at a Glance

But Fitz-Gerald says that estimate is way too conservative. He says China's Belt and Road Initiative really has a $5 trillion price tag.

That means China's not just hoping to trade with more countries, they're investing in the infrastructure needed to physically connect them. That sort of infrastructure spending could be a boon to investors by itself.

In fact, American firms like General Electric Co. (NYSE: GE) are already trying to capitalize on the spending. GE is bidding to supply $7 billion worth of new equipment for Chinese construction companies working on the new Silk Road this year. 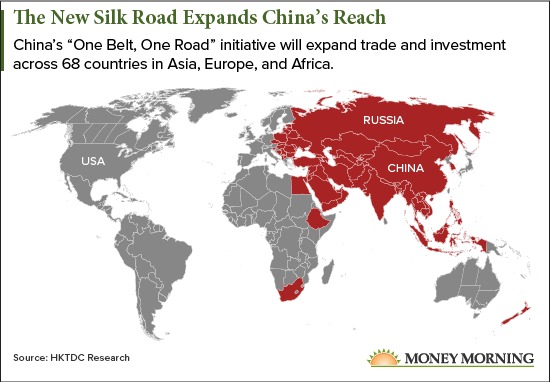 And if a $244 billion company like GE says it has a "laser focus" on this opportunity, then investors everywhere should too.

The good news is you can profit from China's ambitions without buying stocks on the Chinese exchanges. You don't need to worry about dollar-to-yuan exchange rates or find someone who speaks Mandarin, either.

You can bring down a potential 40% profit windfall this year alone, and it's a simple trade any investor can make…

How to Turn One Belt, One Road into Double-Digit Profits