Today we're excited to share with you the latest pick from our champion stock picker, Bill Patalon. In this video, Bill shares with you a gold stock that stands out from the rest - one that allows you to play the "perfect storm" in gold ahead of the crowd. In fact, current events - like Brexit and the election of Donald Trump - are already setting this stock up for some serious growth. And it has plenty of room to run. Check it out...

I'm the Executive Editor here at Money Morning, and I'm here to tell you a story.

It's the story about the first "Internet Gold Rush."

We've all heard the story about the California Gold Rush.

You know, the 1848 gold strike near Sutter's Mill. We learned about it in school. It kicked off the whole Westward movement, Manifest Destiny, the covered wagons, the Transcontinental Railroad...

It brought 300,000 people to California over the next seven years, and it turned America into a country that reached from one coast to another.

But very few people, in fact, have heard about the "Internet Gold Rush." This is one that happened 150 years later, and that's the story I want to tell you today.

McEwen is one of those guys who was raised in a family that was all about gold. I think this guy had gold dust pulsing through his veins.

His dad, Donald McEwen, was a lifelong gold bug. A financier, a manager of gold companies and mines, an organizer, a dealmaker...

And Rob kind of followed him into the business.

Rob grew up, you know, where other people at the dinner table would listen to stories about, "Hey, what did you do today?" or, you know, stories about pirates or explorers or American history, Rob McEwen got gold stories.

It was such an intense focus or topic in that family that he remembers incidents where people would show up at dinner and drop "bags of rocks" on the table. These guys were looking for financing for their next gold project, for their next mine, and they would bring gold ore, or gold nuggets or rocks to McEwen - the elder McEwen, the senior McEwen - to use that as collateral for the deals they wanted to do.

So, not surprisingly, Rob McEwen knew his career was going to be involved with gold.

He followed his dad into the business. He went to work after college with Merrill Lynch, where he did a lot of deals involving gold. And then he actually went to work for his dad's company, McEwen & Co., which was a financing arm for gold ventures.

All the while, he was thinking to himself, "What would it take to create the ideal mining company?"

It was something he thought about in his spare time. He made checklists...

What would I do differently?

How would I innovate?

What would I do that would make my company better than all the others?

He ended up getting involved in a proxy fight for an old mining company in Ontario, Canada.

Folks thought it was kind of a worthless company. It was stuck with that moniker that all gold miners hate to hear - that the property was "played out."

He felt differently. He knew that some of the mining companies in this Red Lake area in Ontario had some very, very rich veins of ore and had some very productive mines.

And he believed that those veins and those mines, those gold reserves, reached under the property he was interested in.

The project didn't go exactly as he envisioned it.

They didn't find the strike. Despite all of their efforts, they weren't able to find the rich veins that he believed were there. There were all sorts of labor problems.

And it was a union workforce, and they resisted.

So he ended up not wanting to back down. And he ended up at loggerheads with the union, which went on strike for four years.

He even got death threats. But he didn't back down...

One day he's at this conference at MIT.

He was sitting there listening to a presentation on Linux, the open-source software/operating system.

And suddenly, he said, it was like an epiphany. He said, "Open-source! That's what I want. That's what I need!" From there, he went to work. And this is where my story about the whole "Internet Gold Rush" comes into play...

So it was March 2000 when he launched this "Goldcorp Challenge."

Physicists, students, military officers, engineers, geologists, anybody you can think of...

The array of people that participated was incredible.

And instead of the disaster that so many people predicted, some folks even predicted that this would expose Goldcorp Inc. (NYSE: GG) to a hostile takeover, instead he got all kinds of geological data, target data, that he didn't have before.

So out of the 14,000 participants in the Goldcorp challenge, the winners came from Australia. It was a group that delivered the most amazing package to McEwen. He later said that they gave him five target sites to drill in. He drilled in four and hit gold in every single one.

Over the next seven years, Goldcorp pulled $3 billion worth of gold out of the ground, and the whole thing turned Goldcorp from an afterthought, from an also-ran, into one of the leading gold miners in the world today.

Well, the fact is that gold is a very complex topic. It's something that could take up a whole presentation unto itself.

So I'm going to vastly oversimplify it here...

The "Era of Uncertainty" Is the Perfect Opportunity

The reality is that there are three or four things I think you have to keep in mind. Three or four potential triggers that could cause gold to skyrocket from this point. Almost kind of a perfect storm, perfect equation for gold. Because the time to buy this yellow metal is not after something happens - it's not after uncertainty arises, it's not after a catastrophe happens. It's before. It's when it's out of favor, when there is a lack of interest, when folks don't want to own it - because that's the time you're going to buy it at a price that makes it worth owning. That's where you're going to make the most money. That's when it's going to give you the best protection when these other events do happen - which they very well could.

And let's look at a couple of them...

First of all, you've got this whole "era of uncertainty" that we've entered into right now. I mean you had the whole Arab Spring thing that went on a few years ago. You had Brexit in Great Britain. You had the election of Donald Trump - which was a big surprise to a lot of folks. In France, you've got a presidential candidate who's threatening to do a Frexit.

So the bottom line here is we are in this "era of uncertainty" that could be a major trigger for gold prices. 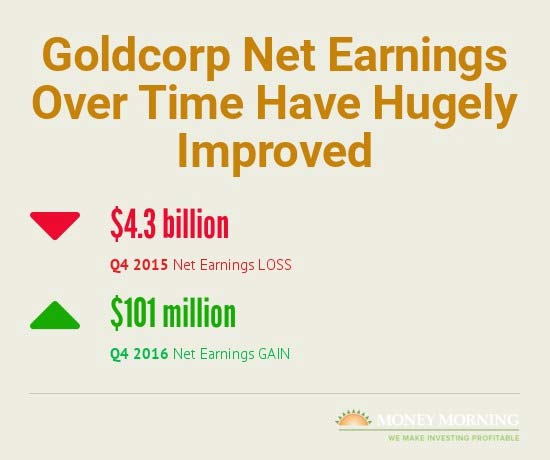 So this brings us back to Goldcorp.

We're big believers that you should own some physical gold. But it shouldn't end there.

You also should own some of the gold miners. And we believe Goldcorp is the best one to own right now.

So there are three reasons why I really like Goldcorp here...

Earnings are improving. It's cutting costs. And it's building for growth.

Let's look at all three of them...

When the company just reported its most recent earnings, it said it earned $101 million, or $0.12 a share.

That was way ahead of the $0.09 a share that analysts were expecting. And it was much, much better than the $4.3 billion the company lost a year ago because of write-offs in its business.

Let's talk about costs, which is a really big deal with miners. The lower you can get your costs, the more money you can make with each ounce of gold you pull out of the ground. 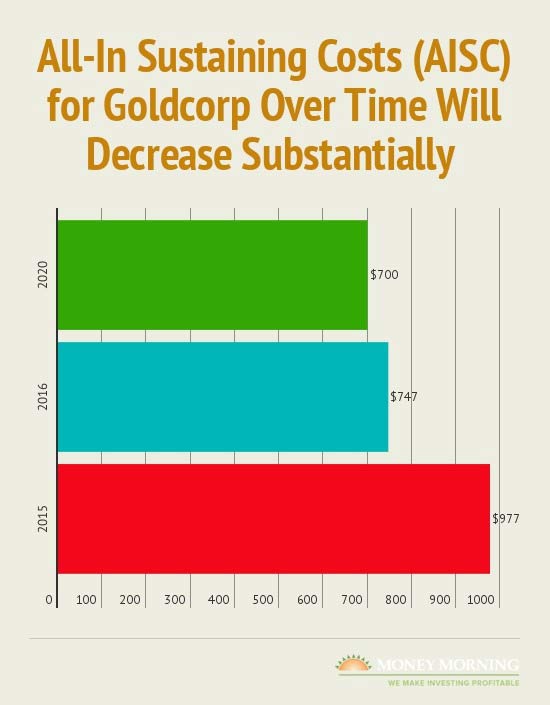 Now, with miners, there's this one figure that's a way of comparing all companies on an "apples-to-apples" basis. And it's all-in sustaining costs, or AISC. Basically it's a measure of mining efficiency. For Goldcorp, in the fourth quarter of this year, their all-in sustaining costs were $747 an ounce. A year ago, that number was $977. So they've cut their costs by about 25% in a year - and they're going to keep cutting it.

Their goal is to get down to $700 an ounce by the end of the decade - and they're already in a pretty good spot.

Their AISC cost is already the fifth or sixth lowest among big miners in the industry - so that's a really big deal! If they can cut this number, keep bringing it down, that means that every ounce of gold they pull out of the ground is going to be more profitable than the last one.

The company has pledged over the next five years to increase its output, its production, and its reserves by about 20%. That's pretty bullish.

As part of that, last year, the company picked up Kaminak Gold. And with it they got the very lucrative, very promising Coffee Gold Project in the Yukon. The Yukon is one of the best places in North America to mine, and by grabbing this property, Goldcorp has bolstered the properties it already has and that it's going to build its future on.

How to Play Goldcorp Now

So how do you buy this stock?

But, the fact is, if the market does roll over, that's going to be very good for gold. That's precisely the kind of situation you're going to see where folks are stampeding into safe-haven assets, store-of-value assets. That's when we're going to see Goldcorp run.

So here's what I recommend...

We talked a minute ago about how the market could roll over.

So I think you should buy a block of Goldcorp here. But hold a little bit of cash back. You might get a shot to add to your holdings at a little bit of a cheaper price. And if you do, grab it there, too.

You won't be sorry.

How much Goldcorp are you stuck with, that you are touting the stock? (Pardon me if I'm cynical, but if it's such a great deal, you shouldn't be telling me–you should be buying with both hands)