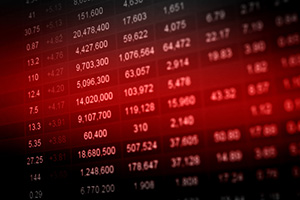 The Dow Jones news for today is stocks sliding as the "Trump rally" fades. Stocks are lower again today as the markets attempt to rebound for the first time since mid-March. The ongoing downturn has many wondering if the Trump rally has finally ended.

On Monday, the Dow Jones fell by 45 points and hit a six-week intraday low after markets reacted to Republicans pulling the healthcare bill from the floor of the House of Representatives. Friday's defeat of healthcare reform could have a profound impact on President Trump's other pressing priorities. The Dow fell for the eighth consecutive trading session.

The Dow Jones futures project a 31-point decline in pre-market hours. The eight-day downturn is the market's worst since 2011 and has many worried that a stock market crash is coming... Here's what you need to know about the impact of the failed healthcare agenda and its impact on the markets.

Energy stocks are generating headlines on news that the Trump administration plans to sign an executive order that will scale back a number of climate policies from the Obama era, according to various sources. Trump's administration plans to bolster U.S. energy independence and crude and natural gas production. In pre-market hours, shares of Exxon Mobil Corp. (NYSE: XOM) and Chevron Corp. (NYSE: CVX) were ticking higher.

Fed Chair Janet Yellen will give a speech at a conference in Washington, D.C., today. The dollar has been weakening since the U.S. central bank hiked interest rates but failed to set a timeline for further changes to monetary policy. That indecision has bolstered gold prices, which pushed prices to a four-week high on Monday.

We anticipate that gold prices could see 12.1% upside from here. And if you want to make a nice profit on the precious metal, we show you how, right here.

Don't Miss These Stock Plays: The Best Stocks to Buy (and When to Sell) for Mega-Profits in 2017