The Dow Jones news today features the last day of July's FOMC meeting and more on the Fed's plan to unwind its massive balance sheet. Dow Jones futures are up 73 points ahead of another busy day of earnings reports, including updates from Coca-Cola Co. (NYSE: KO), Ford Motor Co. (NYSE: F), and Boeing Co. (NYSE: BA). 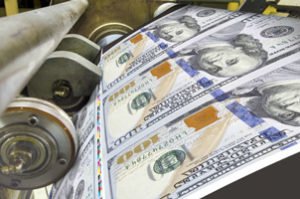 There's No Ceiling for Stocks If This Happens