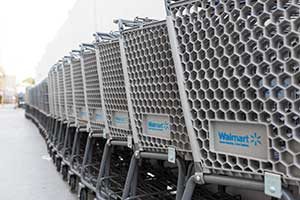 Wal-Mart Stores Inc. (NYSE: WMT) is in the fight of its life.

And contrary to what you may be hearing... it's not winning, according to Money Morning Chief Investment Strategist Keith Fitz-Gerald.

"Wal-Mart is making a comeback. Watch out, Amazon," reported CNN in September of last year.

"Don't bet your retirement on it," cautions Fitz-Gerald.

"All of these moves that Wall Street is interpreting as 'good developments' - Wal-Mart's two-day shipping, in-store pickup, etc. - are being viewed through a rose-colored lens," said Fitz-Gerald. "In reality, they're all 'Hail Mary' passes - meaning desperate measures intended to help the store remain relevant."

Here's the sad truth about the iconic American retail giant.

Too Little, Too Late

Wal-Mart completely misjudged the impact of the Internet on its business, especially as it relates to Amazon's challenge. Executives may not have been as cavalier, but the "situation reminds me of former Microsoft CEO Steve Ballmer, who famously dismissed the iPhone in 2007. And we all know how that ended," says Fitz-Gerald.

Wal-Mart didn't begin to ramp up its e-commerce efforts until late 2015, when it streamlined its mobile app and online ordering platform. By that time, notes Fitz-Gerald, Amazon.com Inc. (Nasdaq: AMZN) had already captured over 33% of all U.S. online purchases.

"The company assumed - like other quintessential brands have - that it's so ingrained in the American psyche that it was immune to anything that challenged the status quo."

Fitz-Gerald sees glaring similarities between where Wal-Mart finds itself and where Sears, Harley Davidson, and Blackberry were a few years ago.

Keith is an expert at identifying market successes and failures, and he believes Wal-Mart's imminent demise can be boiled down to one specific factor: ignorance.

"Like those companies, Wal-Mart remained out of touch for far too long, and that's cost them valuable market share but also mindshare," says Fitz-Gerald.

"Investors all over the world own Wal-Mart in their portfolios, but they don't realize they are playing with fire."

According to NPD Group's Checkout Tracking service, 95% of U.S. consumers shopped at one of Wal-Mart's 4,700 stores or on its website, as reported by CNBC. That means roughly five of every six Americans were customers.

The harsh reality is that now 51% of Americans prefer to shop online instead of in-store, according to a recent report by Big Commerce. That number is rapidly increasing...

American e-commerce sales are growing 23% year over year, according to the same report, with Amazon's juggernaut accounting for 43% of that figure. By 2021, Amazon will account for over 50% of U.S. online sales, according to Fortune.

Many investors don't believe this is possible, yet Fitz-Gerald points out simply, "we've seen this playbook before."

Wal-Mart Will Go the Way of the Music Industry

The vast majority of music executives were caught flat-footed in 2000, when very few people believed that customers would turn to the Internet to browse, purchase, and download their tunes.

Today, global revenue from music downloads and subscriptions far outpace sales of physical records, according to a 2015 report from the International Federation of the Phonographic Industry.

"Music companies are now a shell of what they used to be, and that's unfortunately the very same path Wal-Mart is on today," says Fitz-Gerald.

There's Only One Retail Play for Investors Now

This is a VERY interesting read. Don

Sorry I didn't believe Walmart can make a come back and, if they can at what cost. I was in a Walmart and have cut their staff to save money and, don't believe this will work for them. I go into a store to be waited on for what I purchase. I shouldn't have to check myself out by scanning my products.