One of President Donald Trump's tax reform promises could give the markets - and the economy - a huge boost.

But it would cost the U.S. government up to $3.7 trillion.

And with the failure of the Obamacare repeal, congressional GOPers will now be fighting even harder to make at least one of their main talking points a reality.

Trump's corporate tax cuts could be next.

Right now, the corporate tax rate in the United States is 35%. But President Trump wants to cut that figure dramatically - down to 15%. 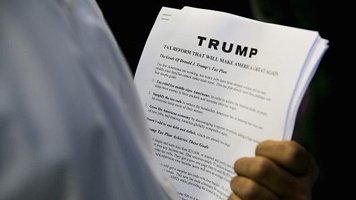 Trump has long claimed that doing so will grow the U.S. economy by encouraging companies to remain stateside. That's because many companies - especially large corporations - often leave America to take advantage of lower corporate tax rates in other developed nations.

Someone or something will have to pay for that massive imbalance...

Here's how Trump's tax reform could boost the U.S. economy... and at what cost.

How to Pay for Trump's Corporate Tax Cuts

Indeed, according to an Aug. 3 New York Times report, the Tax Foundation estimates that cutting the current 35% corporate tax rate down to 15% would add $3.7 trillion to the national deficit over ten years - assuming no additional economic growth and no spending cuts.

So where will President Trump make cuts?

Although many think that he'll make up the difference by cutting government programs, Trump's May 23 budget proposal doesn't differ significantly from President Obama's proposal from the year prior in terms of total money spent. It does spend that money very differently, but it doesn't actually cut government spending.

NYT suggests that he'll pay for the tax cuts by closing loopholes and cutting corporate subsidies elsewhere. For example, he could eliminate tax deductions on interest payments or raise capital gains taxes to put some of the burden on shareholders instead of on the corporations themselves.

But Trump hasn't explicitly said he would do any of that. Instead, the president seems to have put his faith in the pure economic growth that his corporate tax cuts would create...

How Trump's Corporate Tax Cuts Would Affect the Economy

Cutting the corporate tax rate to 15% will be "leveling the playing field" between U.S. businesses and their foreign competitors, Trump stated at a rally on Feb. 29, according to Time.

For context, the U.S. has the highest corporate income tax rate of the 35 members of the Organization for Economic Cooperation and Development (OECD). The average of these countries is 25%, according to a 2013 Tax Foundation report. The country with the lowest corporate tax rate is Ireland, at 12.5%.

Corporate tax cuts would theoretically benefit the U.S. economy because they would incentivize American companies to stay and operate in the United States. Over time, their contributions to American job growth will generate national economic growth.

But the $3.7 trillion question remains: Will this growth be enough to overcome the loss in government revenue?

We can't know for sure, but we do know this: A huge corporate tax cut would bring windfall profits back to companies no matter what.

In fact, there's one stock in particular that we would want to be holding onto if Trump's tax reform was passed...

The Opportunity for Investors in Trump's Tax Reform Proposal

Although Keith's not confident in Congress' ability to get anything done, he explains the upside of a tax cut for Apple in terms of buying back stock and increasing dividends for shareholders:

"People view dividends just as cash flow, but really what they are is an implied promise from management that they think they're going to be able to deliver what the investors expect. So if they brought [overseas funds] home and they did [increase dividends], that would be a huge vote of confidence for Apple and for Tim Cook in particular."

Take a look at the full interview below: