Legendary "perma-bear" Marc Faber says that investors are due for a massive sell-off, according to a June 17 report from MoneyWeek. 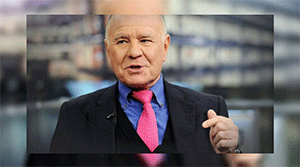 Faber says U.S. markets are heading for "an epic decline in asset prices... after eight-plus years of bull markets," which have left valuations at historically high levels.

Here's a look at the three factors Faber says will cause this "epic decline" - and how you can protect yourself... and your money.

The Stock Market Is Driven by a Small Number of Stocks

The "Gloom, Boom, and Doom Report" author remains very bearish on the markets due to recent gains in most major indices, especially the Nasdaq.

These indices have been "driven by a small number of stocks," according to Faber.

Some analysts chalked the losses up to a simple correction, but Faber saw it as a jump in volatility - a bad omen for the future. "When things finally start going down," said Faber, "they'll go down a lot."

Big Corporations and Rich People Own All the Wealth

According to Faber, political risk also has the potential to wreak havoc on the markets.

"An increasing share of wealth has gone to big corporations and wealthy individuals over the past three decades," said Faber.

Related: The Best Stocks to Buy (and When to Sell) for Mega-Profits in 2017

Indeed, in 2015, the richest 1% of the world's population owned 50% of its total wealth, according to a report by Credit Suisse.

Not only is this concerning for the overall economy, but this will lead to demands for either "a big hike in taxes" or "policies that will lead to a big asset-price deflation," according to Faber.

The problem is exacerbated because both governments and companies are hiding their true debt levels by deliberately underfunding pension obligations - something we've long warned you about.

"In the case of companies, they are using the money to buy back shares instead," reported MoneyWeek.

And what the Fed might do is even more alarming...

In order to try to delay the day of reckoning, according to Faber, the Fed may react by printing even more money. He's long held onto this view.

"Central bankers trying to spur growth are like alchemists trying to make gold, and they're just as likely to fail," said Faber back in 2016.

"But the central banks are just mixing water, in other words, paper money, and the results cannot be a favorable outcome in the long run."

These 3 Catalysts Will Drive Gold Prices in 2017:

"Eventually the system will break," as a result of the Fed's incompetence, Faber said.

Because of these three threats to the markets, he stands by his prediction that shares prices are set to fall by up to 40%.

And as chaos ensues, investors will flood to safe-haven investments like gold.

"We're in this era of uncertainty that could be a major trigger for gold prices," said Money Morning Executive Editor Bill Patalon. Bill is our renowned "champion stock picker" and a lifelong goldbug.

He suggests investors get in on the gold rush before the stock market takes a plunge and the floodgates open.

"The time to buy gold is not after these things start to hit, it's not after gold starts to rally," said Bill. "It's before - when gold is out of favor, when folks don't want to own it."

And right now, an incredibly rare gold anomaly is shaping up in the markets.

It's only occurred twice in the past 20 years, and it's about to happen again. Details here...