The Tesla stock price is down 30% to $168 in 2016, and many investors are wondering if they should buy Tesla stock since it is trading at such a discount now.

According to Money Morning experts, there is a clear way to play Tesla stock now as the company prepares to report Q4 earnings. 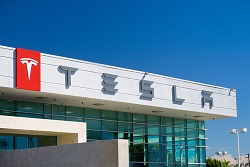 Analysts are looking for Tesla to post earnings per share (EPS) $0.10. The EPS figure has come down from $0.12 three months ago. Still, EPS of $0.10 would be comfortably better than the loss of $0.13 per share reported last year.

Revenue, meanwhile, is expected to grow an impressive 63% year over year to $1.8 billion.

Investors will also look for progress on Model X production and delivery pace to customers. Tesla is notorious for delayed deliveries. But wait times are expected to be reduced as production ramps up.

To boost production and keep up with demand, Musk tweeted on Nov. 10 that he was looking to hire "hardcore software engineers" for his Autopilot software team. Musk also plans to hire over 4,500 new employees in California alone over the next four years. Musk's goal is to build 500,000 vehicles annually by 2020.

Tesla touts the Model X as the "safest, fastest, and most capable sport utility vehicle in history." It boasts all-wheel drive and a 90 kWh battery providing 257 miles of range. The Model X also has ample seating for seven adults and all of their gear. And, it's fast. The Model X accelerates from zero to 60 miles per hour in as quickly as 3.2 seconds.

But the company is still facing some major headwinds...

One is the 70% plunge in oil prices since 2014. Cheap gas has contributed to Tesla stock's drop as electric vehicles lose some of their appeal when gas prices tank.

Another is the growing number of electric cars on the market.

Nearly every major automaker sells at least one fully electric car. Those automakers include premium brands such as Mercedes-Benz, Porsche, and Audi, as well makers of lower-cost EVs, such as the 2017 Chevrolet Bolt and the 2018 Nissan Leaf. The Leaf and Bolt are expected to flaunt ranges of up to 200 miles per charge. That's handily above the 80 to 90 miles current mass-produced EVs provide.

So should investors buy into Tesla stock on its recent dip, or are the headwinds too strong for the stock to continue climbing? Money Morning experts think the answer is a no-brainer...

Why Tesla Stock Is a Long-Term Buy Now

In late March, Tesla will unveil a new Model 3. Late last month, Tesla CEO Elon Musk hinted at an unveiling for the Model 3 similar to the Model X SUV. But we still don't know much about the new much-hyped car.

"The first pictures of the Model 3 will be end of March," Musk said. "I am being a little coy here, we are not gonna show everything about the Model 3 until a lot closer to production time."

Model 3 production is due to start in 2017. That means an unrestricted look at the Tesla Model 3 is a way off. But with a price tag of just $35,000, interest is expected to be robust.

Still, with the kind of volatility Tesla and global markets have experienced this year, TSLA is not for short-term investors.

But Musk's unparalleled vision and ability to create revolutionary products have propelled Tesla to the forefront of the electric vehicle market. And with worldwide revenue from electric vehicles forecast to bring in $488.54 billion by 2030, there's still a lot of reasons to like Tesla stock.