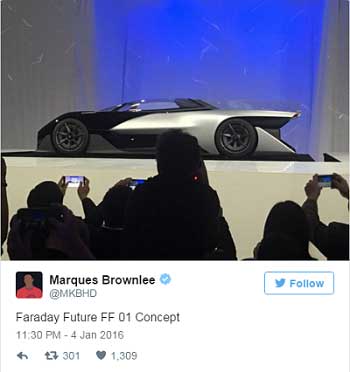 Tesla Motors Inc. (Nasdaq: TSLA) has a new competitor in the electric car market, and investors are worried that this competitor could become a Tesla stock killer.

The company, Faraday Future, is a secretive EV (electric vehicle) startup that revealed its concept car at the Consumer Electronics Show this week in Las Vegas.

But Faraday Future's first vehicle is not the "Tesla stock killer" Wall Street is making it out to be...

Wall Street believes that Faraday Future is a major competitor because its senior vice president, Nick Sampson, was a former engineer for Tesla.

And at the launch event in Las Vegas, Sampson took a shot at his old employer...

Sampson stated that Tesla and its CEO Elon Musk had "created something we should all applaud them for," according to Business Insider. But he then went on to describe how much further along Future Faraday was in its early stages than Tesla.

"Faraday Future was founded just 18 months ago," Sampson stated. "In that short year and a half, we already have a staggering 750 employees globally, breaking ground on a 3 million square foot factory in just a few weeks, and we will deliver our first production vehicle in only a couple years' time."

Sampson says it took Tesla seven years to build its first production facility and it had only 600 employees at the time.

Faraday Future is certainly ambitious, but Money Morning readers need to focus on these three facts when it comes to Tesla stock:

As Money Morning Technical Trading Specialist D.R. Barton puts it, Tesla is "head and shoulders ahead in the electric car front."

The TSLA stock price is down 7.03% so far in 2016, but these dips in price have created a perfect opportunity to buy Tesla stock.

Should I Buy Tesla Stock? The Answer Is Yes, for Long-Term Investors

The electric and autonomous vehicle market can seem exotic because of the large price tags associated with the vehicles. Tesla's Model S has a MSRP of $69,000, while Kelly Blue Book Value stated that the average price of cars sold as of August 2015 was $33,543.

The Model S may cost double what typical consumers are spending now, but Tesla's vehicles are going to be much more affordable in the next few years...

Elon Musk announced in September that Tesla will begin production on an all-electric sedan. Tesla's "Model 3" will cost $35,000 and will be unveiled in March. The Model 3 won't be available to purchase until 2017, but preorders will start after the unveiling.

Faraday Future has not announced the price of its car, and a potential release date has not been revealed.

So Faraday Future may be moving quickly, but Tesla has a huge head start and will be bringing modestly priced vehicles to the market within two years...

To boost production and keep up with this demand, Musk tweeted on Nov. 10 that he was looking to hire "hardcore software engineers" for his Autopilot software team. Musk also plans to hire over 4,500 new employees in California alone over the next four years.

Because of the volatility like we've seen over the past two days, TSLA is not a short-term buy.

But Musk's ability to create revolutionary products and push Tesla to the forefront of the electric vehicle market makes Tesla stock an excellent long-term investment.

The Bottom Line: Tesla is an innovator in an emerging industry, which means the Tesla stock price is going to be volatile in the short term. But if you are a long-term investor, Tesla stock is a buy in 2016. Musk's vision and leadership will continue to keep Tesla head and shoulders above every other player in the electric car industry.

What is the symbol of stock of Faraday Future?

Faraday Future is not publicly traded, so has no symbol.

Tesla is the Future