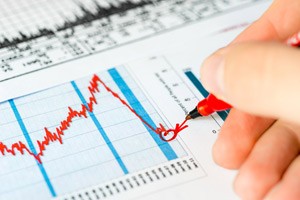 European shares plummeted Thursday, too. Germany's DAX dropped 2.5%, France's CAC 40 gave back 3.5%, and Britain's FTSE 100 was lower by 2.3%. Markets in China, Taiwan, and Japan were closed for a holiday.

Speaking before the U.S. Senate committee Thursday, Yellen highlighted risks to growth and inflation. Her comments stoked concerns that after years of uneven growth, the U.S. economy is becoming more vulnerable to the global slowdown.

Worried about a long period of low inflation, Sweden's central bank on Thursday cut its key interest to a record low of -0.50% from -0.35%. And the bank didn't rule out further action.

European bank stocks declined 4.7% Thursday. The sector is down about 28% this year thanks to uncertainty about interest rates, nonperforming loans, and chaos in emerging markets. Many investors are now worried that Europe is headed for a systemic banking crisis.

With global markets in a free fall and investors panicking about a stock market crash in 2016, here's how low our expert says you can expect the Dow Jones Industrial Average to drop...

In his regular appearance on FOX Business News yesterday, Gilani said investors should expect the Dow Jones to fall even farther in 2016...

Gilani, who has correctly called this recent and ongoing rout in stocks, says we are like a "rudderless ship" right now.

At some point, Gilani said, investors will be looking at the bargains and values that are out there. Yet he added that he doesn't think we are anywhere close to a bottom...

"I think it's a good deal lower," Gilani said. "Investors are looking for a capitulation in order to get back in and to feel safe the bottom has been made so they can get back in. Until that happens, they will just be nibbling here and there. There won't be a strong conviction to hold onto positions."

So how low will the Dow go?

"It's got to hold that and we've got to get some good economic news, globally as well as domestically," he continued. "A 0.7% GDP growth rate is no good. Otherwise the markets are just skittish."

The prediction is concerning, but Money Morning experts put together an entire investing guide for market conditions like this. It will help you protect your money, and even profit, when the markets are falling...

Hang on to your hats folks!
Prepare for the shaking that is coming.