The defense sector has been outperforming the broader market this year, with the NYSE Arca Defense Index (INDEXNYSEGIS: DFI) up 12.8% in 2017, while the Dow Jones is up only 8.3%.

And the defense sector should continue to grow this year as U.S. spending on defense weapons is projected to rise 2.6% to $834.2 billion in 2017. Not to mention President Trump also plans to raise total military spending by $54 billion. As of 2015, the U.S. defense spending budget was $598.5 billion.

To help our readers profit from growing defense spending this year, three of our Money Morning experts are each giving you their top dividend defense stocks to buy in 2017. All three of these companies offer not just high quarterly dividends (+2.5%), but these stocks are also expected to outperform the market this year.

Video
What Is a Dividend Reinvestment Program (DRIP)?

As you can see, many of the defense stocks listed above have already provided investors with both market-beating share-price growth and dividends this year. For example, T.A.T. Technologies is up 20.6% year to date and also boasts a quarterly dividend of $0.34 per share for a 3.22% yield. United Technologies stock also gained 12.1% in 2017 and offers a $0.70 quarterly dividend for a 2.28% yield.

But our experts aren't recommending TATT and UTX stock today.

Instead, they've selected three better defense firms that investors must have in their portfolio this year...

The 3 Top Dividend Defense Stocks to Invest in This Year

Our first pick, Boeing, has been one of Money Morning Executive Editor Bill Patalon's favorite defense stocks since 2011. His consistent recommendation of the company has largely been due to its generous dividend payments.

Boeing currently boasts a dividend yield of 2.76% and dishes out $1.42 per share each quarter. Its quarterly dividend has grown 223% over the last five years and has increased each year since 2012, when it was just $0.44.

Video
Why Boeing Is the Ultimate "Rocky" Stock

"This is a company that has a proven record of taking that cash flow and giving it back to shareholders in the form of dividends, stock buybacks, and other kings of financial engineering," Bill mentioned in February 2017.

As the world's second-biggest defense contractor, Boeing's profits have surged over the last four years. Annual earnings climbed 27.7% from $5.96 per share in 2013 to $7.61 per share last year. Revenue also grew 9.2% over the same period from $86.6 billion to $94.6 billion. This growth largely came from Boeing's massive military orders, including 178 military aircraft and 23,052 weapons systems to clients in 2016.

The company's dominance in the commercial airliner market is also impressive. Boeing secured $76 billion worth of net orders last year for commercial airplanes around the world. These included its order with Norwegian Airlines, whose order of Boeing's 787 Dreamliner fleet became the largest order for any airline company in Boeing's 100-year history.

Our next defense stock to buy is one of the leaders of the cybersecurity industry...

Raytheon stock is our second pick because it ties into one of what Money Morning Chief Investment Strategist Keith Fitz-Gerald calls his six "Unstoppable Trends." 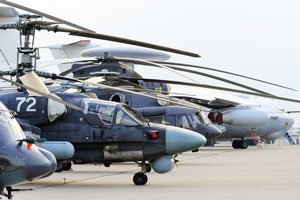 RTN is a great way to invest in the defense trend because the firm supplies weapons used in some of the most important global conflicts right now. A prominent example is the Shayrat missile strike in April, which involved the United States striking a Syrian air base with 59 of Raytheon's Tomahawk missiles. The air strike came in response to Syrian President Bashar al-Assad's chemical attack on civilians just three days prior.

Raytheon's ability to capitalize on the "Unstoppable Trend" of war, terrorism, and ugliness is rewarding its shareholders.

Raytheon offers a quarterly dividend payout of $0.80 per share for a yield of 1.91%. Thomson Reuters analysts predict the stock could rally to $187 within the next 12 months. That means investors who buy in at today's $166.59 price could see a profit as big as 12.3%.

Finally, our third dividend stock pick in the defense sector is one of Money Morning Defense & Tech Specialist Michael Robinson's favorite firms. It's raised its dividend on an annual basis since 2004 - growing 335% over the period - and has also remained a defense pioneer for more than 80 years.

And now it's pioneering one of the most revolutionary weapons technologies of the 21st century - lasers.

Researcher firm MarketsandMarkets reported the market for military laser systems could grow at a compound annual growth rate (CAGR) of 8.9% over the next three years.

By 2020, total contracting sales involving laser weapons in the defense sector could reach $4.6 billion. That doesn't even take into account Trump's planned $54 billion increase in military spending, which could go toward naval ships potentially carrying these laser weapons.

"It sounds like science fiction, but it's a fact," Michael said to Money Morning readers on June 14. "Laser weapons are here now, and perhaps as soon as next year they'll change the way the U.S. military fights conflicts all over the world. You'll have reaped the financial rewards long before that, though."

Thomson Reuters analysts predict this stock could gain 18% by July 2018.

However, if the company has a breakthrough in its newest laser project sooner than expected, that projected return could look very conservative...