Airline stocks may be popular investments in 2017, but we do not recommend adding them to your portfolio. Just take a look at the trading volume of airline stocks, and you can see their popularity.

While we don't recommend buying airline stocks, Money Morning experts have found a way to play the popularity of the airline industry. In fact, the stock we're going to show you today could climb another 16% in 2017, and it pays a dividend with a nearly 3% yield. That adds to the 204.5% gain the stock has returned since we initially recommended it back in 2011. 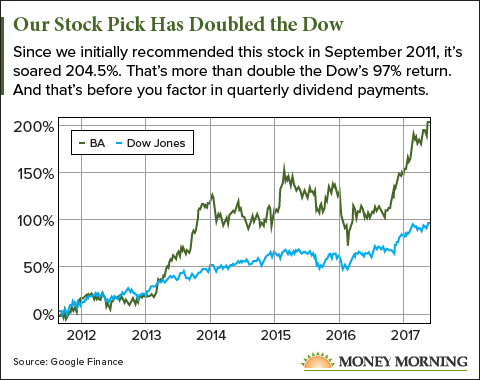 So why are we targeting this sector if airline stocks aren't good investments?

You see, airline demand keeps climbing. And our play will allow you to cash in on the increasing demand without buying into risky airline stocks.

U.S. airline passenger traffic has increased steadily since 2009, when it fell following the financial crisis. Last summer, the peak was 91 million passengers in July, according to FactSet. In July of 2009, there were 77 million passengers flying. That is an increase of 18% in seven years.

Another way to measure increasing demand is through "revenue passenger miles" (RPM). RPM is found by multiplying the distance the plane travels by the number of paying passengers on board.

Between 2015 and 2016, global RPM increased 5.8%. And RPM has grown 13 of the last 15 years. The only two years it did not grow were during the 2008/2009 financial crisis. Even though air travel is expanding, there's one major reason airline stocks are not the best way to play this demand...

Another event that is likely to cause uncertainty in airline stocks this year is the reemergence of Zika virus news. The effect of Zika on the airlines will be hard to predict until the Center for Disease Control (CDC) has a better idea of how fast the virus will spread this summer.

With the huge potential for airlines to be negatively impacted at any given time, they can wreak havoc on your portfolio.  Because of that, we recommend investing in an industry supplier instead of airline stocks directly. This allows you to play the increasing demand of the airline industry without investing directly in airline stocks.