There are two things to note about Facebook Inc. (Nasdaq: FB) that happened in February: The new Facebook emoji reactions that rolled out on Feb. 24 and the 1.03% slip in the Facebook stock price.

We're going to address both today. And while the new emoji reaction buttons don't sound like something investors would be interested in, they play into Facebook's profitability. Let's look at those first… 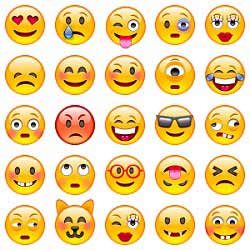 The new reaction buttons now include:

These new options will appease users who have long asked for more than just a "Like" button. But more importantly, these simple reaction buttons are going to help the FB stock price skyrocket to $250 per share by 2020…

Before I get to that, let's look at why the Facebook stock price is down 1.03% in the last month.

Volatile oil prices, concerns that the federal government will enact negative interest rates, and the slowing Chinese economy are all contributing to the stagnant Facebook stock price.

Some people believe that Facebook stock is caught in a "tech bubble." Money Morning Chief Investment Strategist Keith Fitz-Gerald thinks it's something else and that it can reward patient investors…

Fitz-Gerald took issue with the phrase "tech bubble." Rather, he sees this sell-off as a natural unwinding.

"It's logical for big pension funds, for banks, for hedge funds to want to take some money off the table in the face of uncertainty over China and oil," Fitz-Gerald said.

Fitz-Gerald also views this sell-off as a buying opportunity. He stated that Facebook is growing its demand, user base, and business.

It's true though that the Facebook stock price today has been stagnant, and don't be surprised if it remains volatile in the short term, along with the rest of the global markets. But we are very bullish on the long-term outlook for FB stock.

This is where the emojis come back into play. CEO Mark Zuckerberg's sneaky emoji innovation is going to make Facebook the most-desired social media platform to advertise on…

In November 2015, Money Morning Defense & Tech Specialist Michael A. Robinson stated that Facebook has the type of stats that are "a digital advertiser's dream come true."

This impressive audience size is why advertisers helped Facebook record revenue of $17.93 billion in 2015, a 44% increase from 2014. In fact, Robinson is so impressed that he gave Facebook stock a price target of $250 per share by 2020.

And because of the emojis, Zuckerberg has turned Facebook into an even more attractive platform to advertise on…

Product Manager Sammi Krug stated in a company statement that Facebook will use the new reaction buttons to infer if users want to see more of that type of post.

"Over time we hope to learn how the different Reactions should be weighted differently by News Feed to do a better job of showing everyone the stories they most want to see," Krug stated in the Facebook post.

Previously, the "Like" button has been used to determine the types of stories users prefer. But now, Facebook has a direct way of analyzing how people feel about certain posts.

How is this going to help advertisers? Well, Facebook is going to be able to provide users with even more information tailored to their specific interests. Advertisers were limited to one type of reaction before, but now they can see how many people "Like," "Love," or are even "Angry" about their posts.

This will help advertisers determine which ads are most effective.

This advanced analytic data is why Facebook is the top social media platform to advertise on, and it's why Facebook will generate even more ad revenue in 2016 and beyond.

The Bottom Line: The Facebook stock price has been flat over the past month. But the new emoji reactions are going to make CEO Mark Zuckerberg's company an even more attractive platform to advertise on. Facebook is a digital advertiser's dream, and it's one of the reasons why we believe FB stock will trade at $250 per share by 2020.