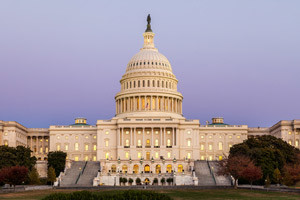 The stock market news today begins with the Dow projecting a 51-point gain before the opening bell. But Wall Street is keeping a close eye on a new healthcare bill that was delayed in the House of Representatives yesterday due to opposition from within the Republican camp and from outside influencers like the Koch Brothers. The House will vote today, although there remains uncertainty that the bill will pass.

President Donald Trump is playing hardball with the Freedom Caucus of the Republican Party and has said that if the bill does not pass, his administration will leave the Affordable Care Act (aka Obamacare) unchanged and move on to other policy priorities.

You Can't Afford to Miss This Massively Overlooked Stock

On Thursday, the Dow lost four points thanks to increased uncertainty over the fate of the healthcare bill. Shares of health insurance stocks Humana Inc. (NYSE: HUM) and UnitedHealth Group Inc. (NYSE: UNH) were a drag on the markets.

Dow Jones futures are pushing higher in pre-market hours. While the healthcare vote and insurance stocks will be the primary focus during Friday's trading session, the markets will receive a barrage of speeches by members of the U.S. Federal Reserve before the bell.

Expect a lot of speculation on the timing of the next interest rate hike by the central bank. Last week, the Fed raised rates for the second time since December 2016. However, the dollar's rally stalled when Fed Chair Janet Yellen failed to suggest more hikes were imminent.

Must See: Rare gold anomaly - an event so rare, it's only happened twice in 20 years! And it's about to happen again. Find out more...

Crude oil prices were rising on news that Saudi Arabia planned to cut supplies to the United States. However, concerns about rising U.S. inventory levels continue to offset optimism about OPEC's proposal to extend its agreement to cap excessive production. A global glut continues to emerge thanks to the ongoing battle between OPEC and United States shale producers. The real winner of that battle has turned out to be investors. Here's why.

But the big news is the price of gold.

After the Fed's rate hike last week, many investors decided that investing in gold could make them a nice profit. Since the FOMC meeting on March 15, gold prices have added 4%. But we fully anticipate that gold has a lot more room to run in 2017.

How much? Money Morning Resource Specialist Peter Krauth projects that gold prices will hit $1,400 per ounce by the end of the year. That's almost a 12% gain.

But if you want to make serious gains - we're talking almost 50% - then you need to know about one of the best gold stocks to buy. We explore the value in one of the top gold mining stocks, right here.

Up Next: These "Second Salary" Plays Could Make You and Your Grandkids Rich