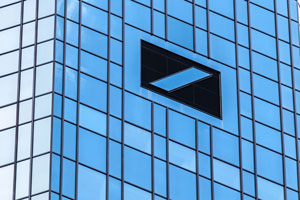 Deutsche Bank has lost over 52% of its value since January and over 56% in the last 12 months.

Market panic over Deutsche Bank AG (NYSE: DB) reached a fever pitch this week as the stock slumped 10% from $13.17 on Monday morning to $12.13 today (Wednesday). It's currently sitting at its lowest level in more than 20 years. In fact, today's DB stock price is 51% less than its lowest price during the 2008 financial crisis (which was $24.58).

Of course, investors are worried the bank may not be able to afford the massive $14 billion fine the U.S. government imposed on it Sept. 16 for trading in toxic mortgages a decade ago.

But earlier today, Christine Lagarde, the managing director of the International Monetary Fund (IMF), assured global media that she doesn't believe DB will need a bailout.

If the bank is not bailed out, Gilani warned, it "would make the Lehman Brothers moment in 2008 look like a day at the beach."

Watch the video below as Gilani and his fellow "Varney & Co." panelists compare similarities between what's going down at Deutsche Bank right now and the 2008 financial crisis: