The Trump rally sent the Dow soaring 13% since Election Day. But as the Dow begins to flatten, investors are beginning to wonder if we are just one destabilizing event away from another stock market crash.

And the French elections this weekend (April 23) could be just the event to upset the markets and lead to a stock market crash in 2017. 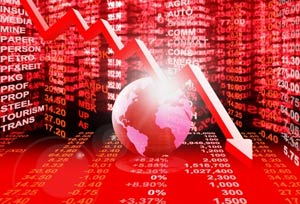 The runoff election in France on Sunday decides the two candidates who will make it to the final election on May 7, just two weeks away.

A simple runoff election might not sound like a big deal, but the reality is the election has global ramifications, including the possibility of a stock market crash coming.

When asked what the market would do if the first round of French elections ended with the most extreme candidates winning, Gilani was quick to reply.

"It goes down," Gilani said. "There isn't any reason for anyone to bid this market up.

And a sell-off coming after stocks surged to record highs this year could create the perfect storm that leads to a market crash.

You see, there's much more at stake in this election than who will run the French government, and it could send U.S. markets into a tailspin...

The fate of the European Union hangs in the balance of the French election. And a complete destabilization of Europe would send markets across the world reeling.

A 2017 stock market crash becomes a serious possibility if the two final candidates are Marine Le Pen and Jean-Luc Mélenchon.

Le Pen, the head of France's far-right anti-European National Front, and Mélenchon, head of France's Left Party, are the most extreme candidates in the running. If these are the final two candidates, a market crash won't wait for the May 7 election, because either one could destabilize Europe.

And a recent opinion poll in France showed a dead-even race between four candidates, including Mélenchon and Le Pen. Le Pen is often in the top two.

"This might be hard right versus hard left," says Gilani.

That's the worst-case scenario for the stock market, and it could lead to a financial crisis. In fact, Gilani notes we've already seen signs of markets dropping as the race tightens.

"More of the same is coming."

But the French elections are only one of the potential big events that could destabilize markets across the world. Greece is in the middle of a debt crisis that could see it leave the EU to avoid paying back loans. Gilani says investors will get slammed if Greece leaves. Here's more of what Gilani has to say about "Grexit"...