Don't be fooled when you see a Bitcoin price prediction that calls for a collapse in the digital currency.

Those predictions are mostly based on the bursting of the Bitcoin bubble. Bitcoin prices soared 8,500% in 2013 only to fall 85% by this past January.

But the critics have misread what the charts are saying.

All they see is a long downtrend. It buttresses their belief that Bitcoin has no value and that its demise is inevitable.

But these critics miss several key points. The truth is, now that it's post-bubble, Bitcoin is finally finding its true value...

What Most Bitcoin Price Predictions Get Wrong

In that case, imported tulip bulbs went from being a somewhat pricey luxury to a wildly speculative investment. Prices soared some 1,500% within a few months. When some started to cash out, the whole thing crashed. In less than a month, prices for the once-prized bulbs fell 99%.

Bitcoin, however, is not that kind of bubble. The tulip bulbs had little practical value; they were just pretty flowers.

Instead, the correct way to view the Bitcoin price trend is to look at the U.S. housing bubble... 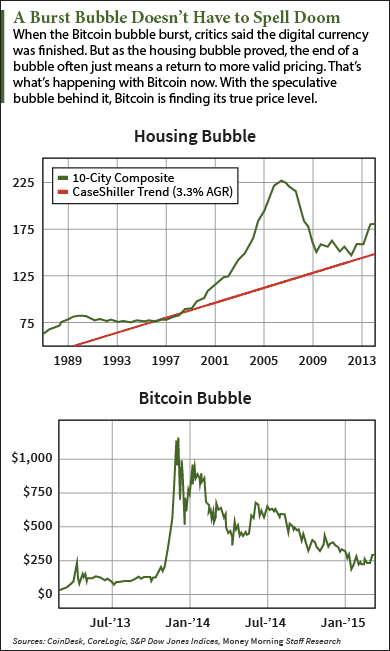 When the housing bubble burst in 2005, prices started to slide back toward the long-term trend - the true value. By 2008, home prices were down 40% from the peak. But those prices were close to levels where they would have been if the bubble had never happened.

That's what's happening with the Bitcoin price. Bitcoin's price decline is similar to what happened to the U.S. housing market, not to Dutch tulips.

You see, Bitcoin - unlike a tulip bulb - has value.

As a digital currency, it can transmit money between any two parties anywhere in the world without the need for banks. And startups have only begun to explore the uses for the technology underpinning Bitcoin, the blockchain.

So what the Bitcoin price chart shows us is a price seeking its true value - like housing.

But that's not the only reason the Bitcoin bubble isn't as significant as most of its critics think.

This one, ironically, has to do with how the Bitcoin bubble was inflated...