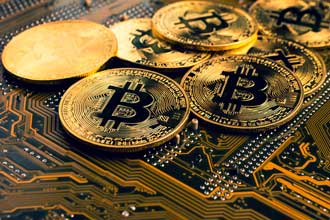 Over the past two weeks, I've received 33 unsolicited messages from friends and family about Bitcoin.

Most are asking some version of the same questions: "Should I buy Bitcoin now? Or should I wait for the price to drop before buying?"

My answer is more or less always the same...

Here's a tweet from the CEO of Binance, one of the largest cryptocurrency exchanges in the world, to help you visualize why... 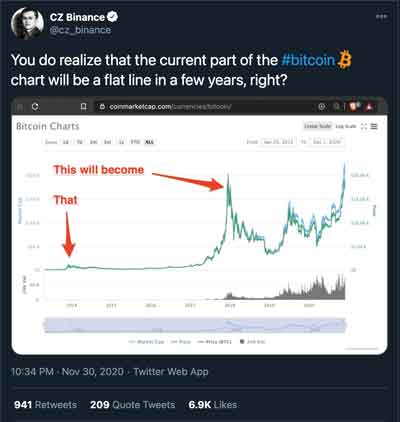 This answer doesn't really satisfy them though, because it feels bad to buy near the all-time highs.

I can empathize with that feeling, but we're still so early in Bitcoin's trajectory.

Short-term thinking will not get you far when investing in Bitcoin. But the more you learn about it, the more long-term potential you will realize it has. And the less likely you will be to sell it when the price drops or spikes 20% in a day or two...

As a thought experiment, imagine investing in Facebook Inc. (NASDAQ: FB) when it had 10 million users just 14 years ago in 2006.

The company was only worth $500 million in the private markets at the time.

But today, thanks to the ultimate network effect that is the Internet, Facebook has over 2.7 billion monthly active users.

And the company is worth $788 billion. That's an insane 157,500% return for Mark Zuckerberg and early Facebook investors.

But here's the problem: Facebook can't grow that much further relative to the number of users it already has...

An estimated 4.3 billion people have access to the Internet - or about 55% of the world population.

And Facebook is banned in China - home to 900 million Internet users.

So, Facebook can really only grow its user base another 26% (or 700 million users) to reach the rest of the world with Internet access that it's allowed to, today.

Bitcoin, on the other hand, can't conceivably be banned by any government.

And you don't even need the Internet to transfer Bitcoin from one person to the next...

You only need a phone that has SMS texting capabilities to transfer Bitcoin from one digital address to another. And there are more phones with the ability to send a SMS text message than there are toothbrushes in the world today...

With 14 billion mobile devices in the world (and growing), any reasonable person would conclude Bitcoin has more room to grow than Facebook.

But the point is not to bash Facebook. Facebook is a fine business that generates plenty of cash and should do well for investors for years to come as advertising continues moving digital and the number of Internet users increases around the globe.

The point is to show you why it's financially irresponsible NOT to allocate at least 3% of your portfolio into Bitcoin now.

This Chart Proves Why You Need to Own Bitcoin Today

My simple prediction from six days ago has already come true as Bitcoin hit a new all-time high yesterday.

While these price predictions may seem wild to some, it's even more wild to me how more people don't already own Bitcoin.

Secretly, I'm hoping it takes longer for the masses to figure it out so I can continue accumulating at what we will look back on and call "ridiculously low levels" in the future...

But at the same time, I'm happy to share this valuable information with anyone who has an open mind and is willing to learn.

In fact, allocating as little as 3% of your portfolio to Bitcoin can dramatically improve your financial outlook.

The "holy grail" of investing is adding something to your portfolio that increases your total returns WHILE decreasing your overall risk.

Bitcoin does this. Here's how...

As you can see from the pie charts above, a 60% allocation to stocks combined with a 40% allocation to bonds returned 6.83% annually from January 2015 through September 2020.

But if you take 0.5% out of each asset class and allocate just 1% to Bitcoin, your annual returns increase to 7.98%.

If you take another 0.5% out of stocks and bonds and allocate 2% to Bitcoin, your annual returns increase 9.11%.

And if you put 3% into Bitcoin, your annual returns would have increased to 10.24% over that time frame.

If the difference in returning 3.41% per year doesn't sound like much to you, consider this...

It's all about the compounding annual growth - Einstein's eighth wonder of the world.

With more than double the total profits after the 30 years, that could mean the difference in how early you retire or the lifestyle you're able to have in retirement.

Plus, the charts above show how owning just a sliver of Bitcoin can reduce your portfolio's risk too.

In finance, we use a metric called the Sharpe Ratio to measure risk.

The reason for this is simple: Bitcoin is NOT correlated with any other asset in the world. So, owning it gives you unique diversification and a higher risk adjusted return.

But you can use its volatility to your advantage with position sizing...

Action to Take: Now is the time to get off 0% and allocate at least 3% of your portfolio toward Bitcoin. Only do more if you're comfortable with it and are committed to never selling. If you have the means to do it, buy one Bitcoin and hold on to that for the rest of your life. Only 21 million units will ever exist - so that means every 371 people in the world (and growing) are going to have to share each Bitcoin by the time all 21 million are mined around the year 2140. That's all you need to set yourself up for financial freedom in the future.