The early stages of the third "supply shock" are being felt by the world's first and only truly decentralized digital asset – Bitcoin.

How much further it could grow after that is anyone's guess. I personally believe somewhere between $100,000 and $300,000 per bitcoin before the end of 2021 is quite reasonable.

The reason for Bitcoin's record-breaking rally is simple, and it's happening basically by design.

Why Bitcoin Is Hitting an All-Time High

First, you need to know that Bitcoin has a fixed supply of 21 million units. There can never be any more created than that.

This is made possible through Bitcoin's code that cannot be changed.

Bitcoin's code states that after every 210,000 blocks, the number of new bitcoins mined per block will be cut in half.

Thanks to Bitcoin's difficultly adjustment, it typically takes an average of 10 minutes to solve one block.

So, if you do the math, that means that roughly every four years, the number of new bitcoins mined per block gets cut in half.

On Jan. 3, 2009, when Satoshi launched Bitcoin into the world, 50 new bitcoins were mined per block.

And most recently, on May 11, 2020, the number of new bitcoins mined per block dropped in half again – to 6.25 new bitcoins per block. 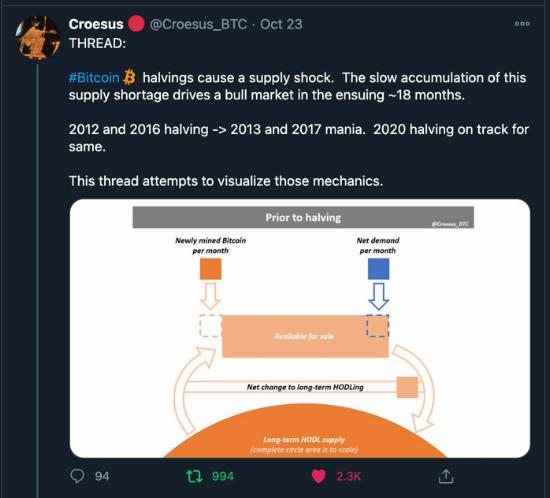 To summarize this tweet thread, here's what you need to know…

As long as demand stays the same following a Bitcoin halving, the price goes up significantly in the following 18 months.

Previous halvings show us it takes about six months to start feeling the "supply shock" from the 50% cut in supply coupled with unchanged demand.

And wouldn't you know… it has been almost exactly six months since the last halving in May.

But over the next 12 months from today, we should expect to see demand pick up even more as the price rises.

Bitcoin is a trojan bull, and the world is once again starting to take notice.

The profits could be life-changing.

Sure..as long as the demand exists, Bitcoin will still make the numbers. One important thing people have to take note of is how to secure their Bitcoins after buying them. Using Bitcoinmix, Ledger and other tools and services help out a lot

What is the best wallet for Bitcoin?