Ah, what a difference a year makes.

Just a couple weeks ago it was reported that a Japanese town recovering from the last year's tsunami-inflicted Fukushima disaster is teaming up with Toshiba Corp. to build several solar electricity plants that combined could be Japan's largest solar facility.

The coastal town of Minami Soma plans to install 100 megawatts of solar, which would be about 2% of the 4.7 gigawatts of capacity at the now idle Fukushima Daiichi nuclear station 16 miles to the south.

If you recall, a huge earthquake triggered an even bigger tsunami that laid waste to northeastern Japan, including three aging nuclear reactors. Parts of Minami Soma were in the no-go zone following the meltdowns.

After the Fukushima disaster, Japan shut down all of its 54 nuclear power stations.

But the lesson here isn't really about how Japan has seen the light (pardon the pun) and is going to replace all its nukes with solar, geothermal and wind.

No, the hidden news peg in all this is most people have put the disaster behind them and now are getting back to business as usual.

And whether the Japanese restart their nukes or not, it's immaterial. Nuclear energy is a clean fuel of the future for developing nations around the world and in particular, China and India.

U.S. investors have been far too focused on nuclear's old reputation, when it took forever to build a plant and then you were never sure how well it was built. Things have changed considerably since those days.

But the U.S. utilities and regulators are still having a hard time finding common ground. There's only one new reactor under construction and nine in advanced stages of planning.

In China, however, there are 27 reactors under construction and 50 additional reactors in advanced stages of planning.

India has 20 reactors in six power plants with at least seven in planning mode. Its goal is to triple its nuclear power from 3% to 9% of overall electricity generation capacity in the next 25 years.

By 2020, India's installed nuclear power generation capacity will increase to 20,000 megawatts from around 4,800 MW today. 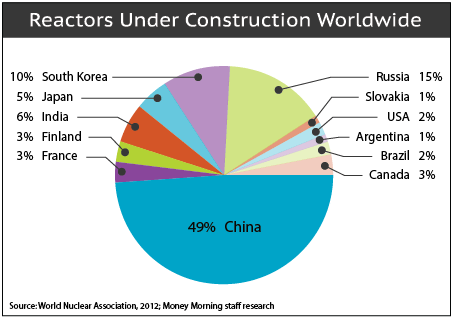 Investing in Uranium: A Bright Idea

It's no surprise share prices of most uranium producers plummeted in the immediate wake of the Fukushima disaster.

Since then, the group for the most part has traded sideways. There hasn't been much interest in investing in uranium stocks; investors want greater clarity on accident's impact on global nuclear demand growth.

Many countries announced a pause in the construction of new reactors and/or a comprehensive safety audits last March, a process that took time to complete. But recent announcements from China, Japan, India and the UK have affirmed that nuclear power's future remains bright. Germany and Switzerland's decisions to phase out their nuclear power programs shouldn't damage the industry's growth prospects.

While the uranium price is lower than it was immediately prior to Fukushima, it's important to remember that it is at a higher level than in mid-2010, which was only six months before Fukushima.

The main things keeping a brake on uranium prices now are the current supply-demand balance and also some residual uncertainty regarding Japanese reactor restarts and the issuance of new reactor licenses in China, which were suspended after the Fukushima accident.

Experts are now saying that we could see some positive news on both fronts in the not-too-distant future. It looks increasingly likely that Japan will begin to restart reactors. Local opposition to reactor restarts was overcome last month, and the government appears to be getting closer to a restart decision.

In China, some nuclear regulators have come out publicly over the course of the last few months, saying that they will begin to issue new reactor licenses again. And at the beginning of June, the Chinese cabinet reportedly reconfirmed the country's commitment to its nuclear program.

Cameco Corp. (NYSE: CCJ) is the largest pure-play miner of yellowcake and is a must-own for investors interested in profiting from rising demand for uranium.

And Cameco has a strategy to double its production by 2018. To accomplish that there may be some acquisitions in the company's future. With prices flat-lined until demand picks up and smaller miners getting stretched over the past year, this may be the perfect time to snap up productive properties and eliminate some of the competition simultaneously.

Also, Cameco has a series of major projects underway. The largest is the long-delayed Cigar Lake mine in Canada. The company expects the facility to produce about 1 million pounds annually from the mine by 2013. The mine's annual output could hit 5.6 million pounds by the latter half of the decade.

Cameco is in prime position to fuel the next generation of nuclear reactors and score some big gains in the process. It's a "Buy" up to $28.

Is this still a recommendation. Seems like CCJ and URA have been volatile but prices today are about where the were a year ago.