Republicans and Democrats have engineered a system that almost certainly wasted your vote for Congress in the November election.
Take Ohio's 15th District.

In this district's 2008 election for the House of Representatives, Democrat Mary Jo Kilroy defeated Republican Steve Stivers by a margin of just 0.76%.

Then the 15th District was reconfigured in 2011.

The following year, Stivers defeated Democratic challenger Pat Lang by a margin of 23.12%.

In 2011, most of the area's Democrats were bunched into the neighboring 3rd District, which is equally uncompetitive. Democrat Joyce Beatty won by a margin of 36.6%, wasting another 300,000-plus votes.

Sadly, this isn't a rare event. It's an example of the disturbing trend in U.S. voting that has eliminated competition in 94% of the country's congressional districts.

How Voters Lost Congress to the "Safe Seats" Movement

Only about 25 of the 435 congressional districts are competitive now – less than 6%.

In other words, most congressional districts have enough of a majority for one party that it's a "safe" win in almost every election.

It wasn't always this way.

As recently as 1992, more than 100 congressional districts were competitive, nearly 24%.

But today it's not unusual for a state to have no competitive districts. 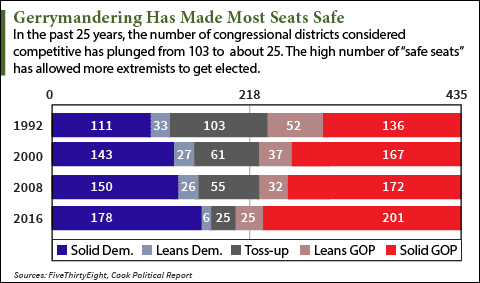 Ohio, a critical swing state in presidential elections, had not one close congressional race in 2016. Out of Ohio's 16 districts, the closest margin of victory was 19 percentage points. And almost all – 14 – were landslides of 30 percentage points or more.

When election victories are that lopsided, millions of votes are wasted.

This Is Why Congress Is Ruined

The large number of safe seats also has made it easier for extremists in both parties to get elected. More moderate candidates often get knocked out in the primaries. When a seat isn't competitive, it's much easier for a hardline conservative or liberal to then win it in the general election.

More extremists in Washington is why the partisan divide has grown into a chasm, and why the political fights have grown increasingly bitter.

It's also why America is stuck with a do-nothing Congress. 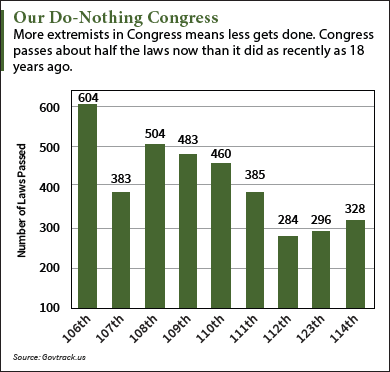 While the Republicans have gained the most benefit from safe seats, they've also had to cope with an unintended consequence – the rise of the Freedom Caucus.

The Freedom Caucus consists of about 30 of the most conservative members of the GOP. It tangles with the Republican establishment almost as much as the Democrats do. And it has teeth.

The worst part is, these safe districts haven't arisen by accident. They've been created deliberately by both the Republicans and Democrats to make winning elections easier.

Trending: China Warns Trump It Will "Take Revenge" if He Ends "One China" Policy

Plus, campaign money that would have gone to uncompetitive districts can be re-channeled to swing districts.

This is how they did it…

This Old Tactic Is How Your Vote Gets Wasted