An iconic Southwestern energy patch player, T. Boone Pickens has built a legacy over the decades that proves the old Texas saying: "It's not the size of the dog in the fight, but the size of the fight in the dog."

In the wild days of the 1980s, made famous by a generation of traders who emulated the likes of Gordon Gekko, few could ever match the Pickens eye for the big deal.

Never eat anything bigger than your head?…. Pickens never heard that one.

As the head of Mesa Energy, his first deal was to purchase the Hugoton Production Company – made notable by the fact the company was 30 times the size of his own.

His thirst for Goliaths continued for decades to come. He once even went after Gulf Oil, which is now Exxon Mobil.

The point is Pickens has never shied away from risk when he saw reward. And for all his bold achievements there is always less "crazy" there than there seems to be.

And if you're looking for a guy who knows:

He's the Warren Buffett of the energy patch.

That's why there is more there than meets the eye in his unique venture into the natural gas market with Clean Energy Fuels Corp. (Nasdaq: CLNE). Pickens is its founder and largest individual shareholder.

A little over a decade ago, Pickens began to build an integrated natural gas company that would support natural gas vehicles (NGVs) from golf carts to tractor trailers.

Clean Energy Fuels Corp. was the first step in the integrated energy concept — which isn't a surprise coming from a lifelong oil man.

You also might recall that in 2008 Pickens unveiled his Pickens Plan, which promotes natural gas as an alternative to imported oil and a bridge to future renewable energy resources like wind power.

As Pickens points out, electric vehicles (EVs) may be more popular but you can't make commercial trucks electric because you can't derive the necessary torque from an electric engine.

There are also questions about what impact high levels of EV adoption would have on electricity generation and the demands on the antiquated power grid. NGVs don't have these issues.

Four years later, CLNE is a story of note because it has become a vertically integrated force in the natural gas industry.

CLNE has built a network of subsidiaries across North America to make natural gas vehicles more accessible and practical. These subsidiaries include:

CLNE even has a subsidiary that develops biomethane fuels (CE Renewable Fuels). These are fuels derived from landfills and other organic waste facilities (a growth industry to be sure). 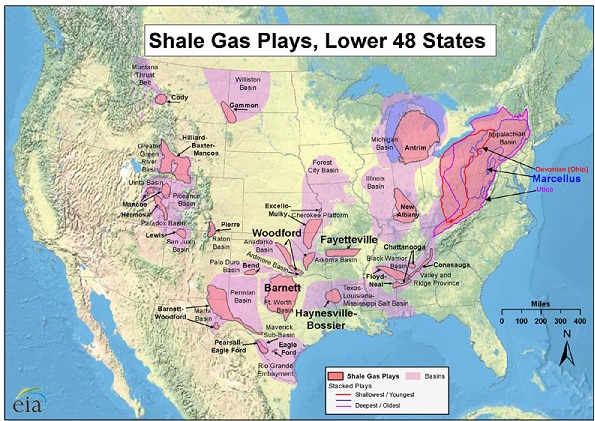 The Saudi Arabia of Natural Gas

Nat gas prices are so low for two reasons. First, it's the weak economy. And second it's the reality embodied by the map above: new oil shale discoveries mean there are larger reserves of natural gas in the U.S. than there are oil reserves in Saudi Arabia.

The truth is we have more natural gas reserves than we know what to do with. Unless, of course, you're T. Boone Pickens.

If natural gas is cheap, and municipalities and fleets and trucking services can convert their vehicles to a low cost, stable alternative to petroleum with a solid, predictable infrastructure, isn't now the time to do it?

We certainly have the pipelines to move the gas around.

And since we don't have many ports for moving liquefied natural gas (LNG) to outside markets, the domestic production stays here. So when organizations commit to long-term planning, natural gas becomes the fuel of choice.

As more and more organizations, businesses, and consumers opt for natural gas powered vehicles, demand will increase, which will put pressure on supplies and move prices higher — especially as LNG export facilities come on line in a few years.

And even when we get to that point, you can guarantee that CLNE will be a part of the LNG export business as well.

Granted this is not going to happen in the next year. But as long as all of these forces remain in play, natural gas has a bullish future.

But don't wait for the rally to jump in.

While this may not be the ultimate bottom, there is a lot more upside potential here for long-term investors in an integrated natural gas play than there is downside. CLNE is a buy below $16/share.

After all, Pickens told an audience at the National Press Club a few years ago, "I'm not a young man; I don't buy green bananas anymore."

Here's a guess CLNE is no green banana but part of a longer-term vision from somebody with an eye for the right deal.

can't extract enough torque from an "electric engine"? How about railroad locomotives? The diesel turns a generator that supplies electricity to electric motors attached to the wheels. Takes a lot of torque to pull 150 freight cars.

Torque is one of the best things about the electric motor, right down to 1 RPM!

You don't seem to realize that locomotive is ultimately powered by diesel engine, only the power is delivered to wheels by electricity. So it is not electric vehicle by definition.
What the article says is (i agree the wording is not quite right), that BATTERY POWERED electric vehicle can not deliver sufficient torque, because of battery limitations, to draw high torque from it will effectively "short battery out", and cause it to overheat, even explode, not mentioning very short cycle — the truck would not get very far.
So the EV concept is so far relegated to city busses.

The comments about electric motor torque are so INCORRECT that the entire artiicle praising LNG comes into question….which is sad because I generally believe the balance of the article and, last week, invested in CLNE, myself. Very few propulsion s have more torque at low speeds than a DC electic motor………. but excessive weight keeps the DC systems or out of most designs (planes, trucks, cars) except for the electric and diesel electric train.
John Cleary, retired engineer