A speech former President Bill Clinton gave on immigration 20 years ago – one that received a thunderous round of applause afterward -- sounds today like it could have been made by GOP presidential nominee Donald Trump. 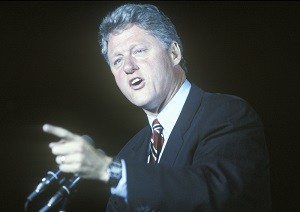 You see, during his 1996 State of the Union address, Clinton touted enhanced border security measures and a crackdown on businesses hiring illegal immigrants – two hot-button issues that are pillars of the Trump campaign…

Trump and Clinton on Immigration: Tighten Borders and Deport

President Clinton began his speech by saying, “There are some areas that the federal government should not leave and should address and address strongly. One of these areas is the problem of illegal immigration.”

He then proceeded to go right into the details: “After years of neglect,” he said, “this administration has taken a strong stand to stiffen the protection of our borders.”

This sounds eerily similar to Trump on border control: “On day one, we will begin working on an impenetrable, physical, tall, powerful, beautiful southern border wall,” the real estate magnate said on Wednesday, Aug. 31, to a crowd in Phoenix, Ariz. “We will use the best technology, including above- and below-ground sensors, that's the tunnels.” Trump continued to say that he’ll increase U.S. border patrol three-fold under his presidency.

“We are increasing inspections to prevent the hiring of illegal immigrants,” Clinton said. “And tonight, I announce I will sign an executive order to deny federal contracts to businesses that hire illegal immigrants.”

Don’t Miss: Why Trump’s fundraising lag gives him an advantage over Hillary Clinton

Trump has likewise made harsh statements toward businesses that hire undocumented migrants. “We will turn off the jobs and benefits magnet [for illegal immigrants],” Trump told the crowd in Arizona. “Those who abuse our welfare system will be priorities for removal,” he said.

Bill Clinton Speaks on Immigration During the 1996 State of the Union Address. Source: Jesse Finance, uploaded on Aug. 26, 2016.

It’s interesting to note that Clinton actually did manage to follow through with some immigration reform.

The very year he made his SOTU address, he signed the Antiterrorism and Effective Death Penalty Act, or AEDPA. This legislation greatly expanded the grounds for detaining and deporting immigrants, including long-term legal residents, for the first time in U.S. history. He also put in place fast-track deportation procedures, which are now frequently used in the United States.

Alongside illegal immigration, the American public is also concerned about how Donald Trump and his rival Democratic presidential nominee Hillary Clinton will affect the stock market should either one become commander in chief.

Money Morning's Technical Trading Specialist D.R. Barton, a nationally recognized financial coach, says there is only one candidate capable of making a lasting impression on the American middle class.

Yeahh, It seeing to be that everything is ok for the hypocritical "liberals".