The staggering level of U.S. debt could slow down the economy - and your investments - if it isn't contained. Fortunately, you can protect your nest egg...

That trend will continue...

The Congressional Budget Office projects the government's total debt will reach $31 trillion by 2027. And that was before the latest tax cut, which analysts project will add another $2 trillion to the debt.

But this isn't a new problem. The federal debt has grown under every president going back to the end of World War II.

However, the federal debt has begun to rise more quickly under each new president. Check out the staggering growth below... 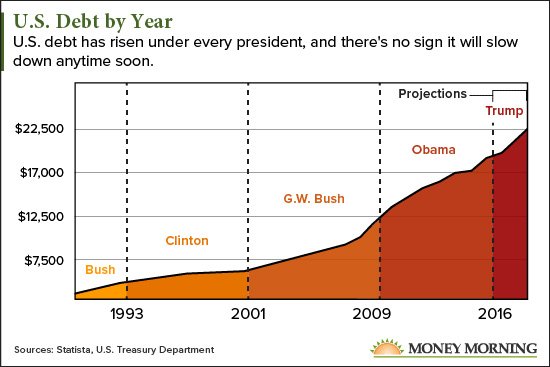 The federal government's debt problem is so bad, we're expecting to see a deficit of $1 trillion as soon as 2021.

Make no mistake: The potential impact on your money is serious.

Not only could the massive debt weigh down the economy and leave the government with little room to stimulate it, the debt could also weaken the dollar's value, dampen the demand for U.S. Treasury bills, and potentially lead to higher interest rates.

That's assuming the government stays solvent through a debt crisis.

In short, it's crucial that you take steps to protect your money - including your retirement investments - from the government's unwillingness to manage the debt.

But the government is in the process of making it even harder to do that.

It's using an obscure loophole buried in Title 29 of the U.S. Labor Code to threaten retirees.