During the height of the Deepwater Horizon tragedy four years ago, I had my graduate students monitor the flow of oil from the sunken platform in the Gulf of Mexico.

Most of their work involved rather straightforward calculations based on undersea camera footage.

But from time to time, flimsy protoplasmic-like structures would float across the screen. The students called them "ghosts."

One student even casually wondered, "What if the ghosts had caused all of this?"

With that, I walked over, checked some figures, and immediately called the U.S. Coast Guard contingent that was overseeing the data from the disaster.

Fast forward to today, and there have been some equally disquieting discoveries in the news of late.

So what do mysterious holes in the Siberian permafrost, hundreds of gas plumes off the East Coast of the United States, and our "ghosts" apparently have in common?

It seems to be icy methane hydrates, touted by some as the fuel of the future...

According to an April study issued in the Proceedings of the National Academy of Sciences, permafrost soil, which typically remains frozen all year, is thawing and decomposing at an accelerating rate.

This process is releasing more methane into the atmosphere, causing the greenhouse effect to increase global temperatures, potentially creating a positive feedback situation in which even more permafrost begins to melt.

"The world is getting warmer, and the additional release of gas would only add to our problems," said Jeff Chanton of Florida State University, a member of the study group. He added that, if the permafrost completely melts, there would be five times the current amount of carbon equivalent in the atmosphere.

Unfortunately, that corresponds with what Russian scientists found when they analyzed the giant mystery craters that were recently discovered in the Siberian Yamal Peninsula.

Andrei Plekhanov of the Russian Scientific Center of Arctic Studies, who led an expedition to the first crater, told the journal Nature in late July that his team found concentrations of methane approaching 9.6% at the crater's floor. 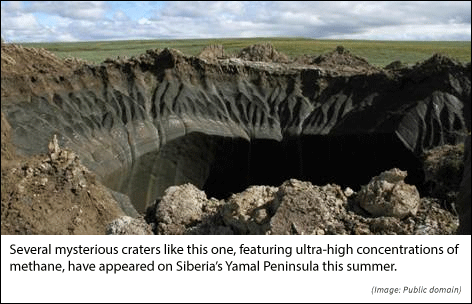 That's more than 53,600 times higher than the average of amount of methane usually found in the atmosphere (measuring 0.000179%).

Now scientists are worried that warming temperatures are going to create the conditions for more permafrost melting, releasing additional methane in those areas (like Yamal) where there are major natural gas deposits.

Then there is the problem that was recently disclosed.

On Sunday, August 24, a study released online in the publication Nature Geoscience described the discovery of 570 plumes of methane "percolating" off the East Coast of the United States.

The research is based on data collected in a survey from 2011 to 2013 by the research vessel Okeanos Explorer. Equipped with multi-beam sonar along its hull, the vessel not only mapped the sea floor along a path off the coast of North Carolina to Massachusetts, but also recorded the reflections in the water column, discovering the distinctive signature of methane gas bubbles.

Most of the seeps were found at depths of 180 to 600 meters along the upper slope of the continental margin. This is the area where the continental shelf rapidly falls off to a 5,000 meter deep ocean plain.

As Science reporter Eric Hand puts it: "The seeps suggest that methane's contribution to climate change has been underestimated in some models. And because most of the seeps lie at depths where small changes in temperature could be releasing the methane, it is possible that climate change itself could be playing a role in turning some of them on."

The Energy Trapped in Ice Is Enormous