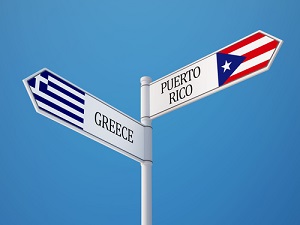 With news of both a Greek default and what was almost a Puerto Rican default, observers are predictably going to find a way to shift focus at some point – to the $18.2 trillion in U.S. debt.

The simple answer is yes, the U.S. government can default on its debt, but not in the same manner as Greece or Puerto Rico.

That means they have to obtain those respective currencies to pay off both interest and principal on their debts. In the European Economic and Monetary Union, member states cede control of monetary policy to the European Central Bank. They are essentially using a foreign currency. Puerto Rico operates much like a U.S. state in that it uses the dollar and denominates debts in them but can't print them itself.

The Greek government, for example, can obtain euros by either exporting goods in exchange for them with other euro area countries or by issuing debt that has to later be repaid in euros.

As the euro-denominated debt grows, Greece can begin saving euros to pay down that debt. It can cut spending or raise taxes.

The moment that debt becomes unpayable, either because Greece doesn't have the productive capacity to support exports or it isn't generating enough revenue through taxes, Greece will default.

This is the same with Puerto Rico and the dollar.

The bottom line is that Puerto Rico and Greece need to have some savings to draw upon to pay back debts.

The U.S. is entirely different. This is because the U.S. debt is denominated in dollars, and the U.S. government is the sole issuer of the dollar. There is no question of solvency because the United States can simply "print" the money it needs to pay its debt.

So, what could happen to make the U.S. government default on its debt?

How the U.S. Government Could Default on Its Debt

The odds of a U.S. "default" of some kind are certainly growing exponentially due to our own centralized mismanagement of the past 15 years or so. You can only pile-up so much debt ( QE ) before the side-effects ( chronically slow growth) begin to overwhelm everything else you try to do.

We are already a bit beyond the catch-up phase, so whatever happens down the road- besides finding the can, is probably baked-in. Elections won't change much more than short term voter sentiments. So, better dig-in for the long haul. Quick and Easy won't really fix a thing, as neither will campaign promises or political (party) rhetoric.