On June 22, the Senate fell one vote short of attaching a rider to the Commerce, Justice, Science, and Related Agencies spending bill that would effectively grant the FBI sweeping new surveillance authority.

Though it initially lost, this measure — called the McCain Amendment 4787 – will be put to re-vote on the Senate floor sometime this week by Senate Majority Leader Mitch McConnell, who spearheaded the legislation.

The McCain Amendment 4787 would specifically allow federal authorities warrantless access to all sorts of citizens' private and personally identifying information, including:

And you won't have to apply for a mortgage to have your credit score arbitrarily examined by the government either.

In spite of the obvious over-reach this bill would allow, there are many senators, both Democratic and Republican, rooting for it to pass…

Senators who initially supported this amendment were largely driven by fear. They didn't want to seem soft on terror in the wake of tragedies in Orlando and San Bernardino (Dallas, of course, had not happened yet). 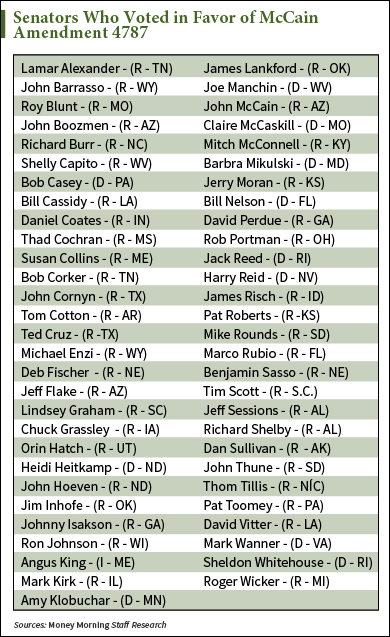 The fact that these pro-warrantless surveillance senators lost by one vote shows just how divided the chamber truly is on this measure.

So the results of this week's revote – especially after Dallas – could go either way.

It all depends primarily upon the following legislators, who FightForTheFuture.org – an online nonprofit civic campaign site – believes will be the ultimate deciders of McCain amendment 4787's fate…