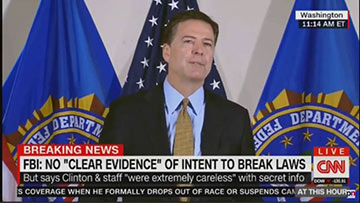 In fact, it strengthened Trump's position as the insurgent populist who takes on a corrupt leadership class, a.k.a. "Crooked Hillary."

That's because, even without an indictment recommendation, much of what Comey espoused in his press conference is material that discredits Clinton's character. For example, the FBI director's finding that Clinton and her team "were extremely careless in their handling of very sensitive, highly classified information" points to her recklessness — a trait she frequently attributes to Trump.

Comey also gave Trump fodder against Clinton's ability to handle our national defense. As a July 5 New York Times op-ed pointed out: "To [Clinton's] promises to defend the United States, Mr. Trump may now retort with Mr. Comey's warning that 'it is possible that hostile actors gained access' to Mrs. Clinton's email account and the top-secret information it contained."

The ad pointedly fixates on one of the most vulnerable aspects of the Clinton email saga: her blatant lies about sending and receiving classified information on an unsecured server.

It does this by playing a clip from a March 2015 ABC News interview with the former secretary of state in which she says, "I did not send or receive any information that was marked classified at the time."

Then the ad jumps to Comey's press conference Tuesday morning, during which he directly contradicts Clinton by saying, "From the 30,000 emails returned to the State Department in 2014, 110 emails in 52 email chains have been determined by the owning agency to contain classified information at the time they were sent or received."

These clips are literally broken apart and repeated in the new Trump advertisement to emphasize the hypocrisy between Clinton's claims and Comey's statement.

And the deconstruction works very well…

Hillary's College Curriculum: The "Hillary Clinton Student Loan Plan" has been officially announced and while it has a lot of perks, the proposal will also likely cost Uncle Sam $1 billion. Here's how…