Potential Bitcoin ETF investors got more good news yesterday (Tuesday) when the SolidX Bitcoin Trust filed an S-1 with the U.S. Securities and Exchange Commission (SEC) to list on the NYSE Arca exchange. 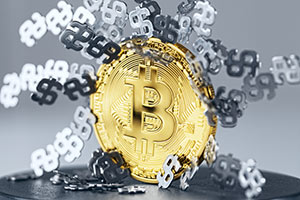 The news comes less than two weeks after twins Cameron and Tyler Winklevoss filed a sixth amendment to the S-1 form for their proposed Bitcoin ETF, the Winklevoss Bitcoin Trust (BATS: COIN).

That means the SolidX Bitcoin ETF (NYSE Arca: XBTC) is now in a horse race with the Winklevoss Bitcoin ETF to become first Bitcoin-based exchange-traded fund on a major U.S exchange.

As of now the only Bitcoin-based fund in the United States is Grayscale Investments' Bitcoin Investment Trust (OTCMKTS: GBTC).

The BIT has traded on the OTC Markets since May 2015, but presents some extra hurdles and risks to retail investors. For instance, it does not have SEC approval. Both of the pending Bitcoin ETFs will be SEC approved and trade just like any other major-exchange ETF.

SolidX Partners Inc., the startup behind the new Bitcoin ETF, received $3 million in seed venture capital in 2014. In addition to offering blockchain-based software solutions, SolidX initially sought to provide hedge funds with access to Bitcoin investing. But apparently the company now sees a better opportunity in launching an ETF.

And it may not be a coincidence that the SolidX Bitcoin ETF is showing up so soon after the latest Winklevoss filing.

"On Wall Street, the easiest way to make money is to copy what somebody else is doing," said Money Morning Capital Wave Strategist Shah Gilani, a former hedge fund trader.

That means we'll probably see a lot more Bitcoin ETFs in the future, and especially after the first ones receive SEC approval. Remember, the first gold-based ETF only launched in 2003; today more than 30 trade on U.S. exchanges and there are dozens more around the world.

So the question now is which Bitcoin ETF will get the prestige (and marketability) of being first.

The Winklevoss Bitcoin ETF is definitely in the lead - though not by as much as it seems...

Why the Winklevoss Bitcoin ETF Has an Edge Right Now

The June 29 amended S-1 filing by the Winklevoss Bitcoin Trust came 18 months after the last one, and three years after the initial S-1 filing.

So when it comes to the S-1 documentation, the two aren't that far apart.

However, the Winklevoss Bitcoin ETF took another, critical step two weeks ago that few have noticed.

Because Bitcoin is a new type of commodity, it requires a rule change filing with the SEC by the exchange that will carry it. BATS filed for that rule change for the Winklevoss Bitcoin ETF on June 30.

The rule change alerts the SEC that BATS wants to add Bitcoin to its roster of commodity-based trust shares and explains why it should be allowed to do so. The Winklevoss Bitcoin ETF can only go forward if the SEC approves the rule change.

But this rule change applies only to BATS...

You see, the NYSE Arca exchange has its own rules. And it has a similar requirement saying it must submit a rule change request in the event it wants to trade a new type of commodity.

NYSE Arca has not yet filed for such a rule change. It's possible that in concert with SolidX, the plan is to wait to see how the BATS filing is treated.

That strategy would concede first place to the Winklevoss ETF. The approval process requires a public comment period of at least 45 days. So a NYSE Arca filing after the SEC approves the BATS filing would guarantee that the Winklevoss Bitcoin Trust goes live first.

For Bitcoin investors, though, what matters most is that they'll have a choice among two Bitcoin ETFs. And there's already one big difference.

The SolidX Bitcoin ETF S-1 says that it will be insured against the loss of bitcoins through theft, destruction, or computer fraud.

But the Winklevoss Bitcoin Trust noted that it would not have insurance, blaming "insurers' lack of understanding and sophistication with respect to digital assets" that has resulted in a "thin marketplace" for Bitcoin insurance.

On the other hand, the SolidX Bitcoin Trust will be the far smaller fund, with an initial offering value of just $1 million compared to the $65 million aggregate value of the Winklevoss Bitcoin ETF.

If all goes well, we'll see the Winklevoss Bitcoin ETF get SEC approval by the end of the year, or early in 2017 at the latest. Shortly after that, the SolidX Bitcoin ETF should get approved.

And when that happens, the Bitcoin ETF floodgates will open.

How Bitcoin Lapped Every Other Investment Class: While the mainstream media made much about the collapse of the Bitcoin price in 2014, few have taken notice that over the past three years the digital currency has delivered annual returns that dwarf everything else out there. And you'll be stunned at Bitcoin's outlook for the years ahead...

Very interesting news. It would be great to see a bitcoin fund traded on a major exchange.

I was just looking at GBTC, but I think I would trust a fund with insurance more.

I wonder what type of fees these would carry. Right now, it's pretty easy to buy bitcoin with minimal cost. That said, I wouldn't mind having some in my IRA.

Also I wrote about investing in bitcoin a couple of weeks ago. You can find the article here: https://kennethashe.com/buying-bitcoin-investment/

I think it has a lot of potential, and I imagine that the creation of these two ETFs will help drive the price up and with enough investors, it could reduce volatility.

I've worked with Dave for years – indeed, I hired him here at Money Map Press. So I know how GREAT he is.