After 18 months with no word one way or the other, the long-anticipated Winklevoss Bitcoin ETF (exchange-traded fund) has taken two big steps toward approval this week. 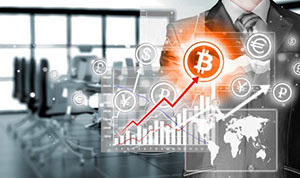 It's been exactly three years since the Winklevoss Bitcoin Trust (the fund's official name) filed its initial S-1 form. Until now the last revision seen had been Amendment No. 5, filed Dec. 31, 2014.

On Wednesday the news drought ended with the filing of Amendment No. 6.

That alone tells us that the Winklevoss Bitcoin ETF is alive and moving forward. Another, even more important step in the approval process took place on Thursday - but I'll get to that in a minute.

The latest U.S. Securities and Exchange Commission (SEC) filing for the Winklevoss Bitcoin Trust featured a lot of key changes...

No explanation was given for the switch. But it's possible that Nasdaq got cold feet. Bitcoin has experienced a lot of growing pains over the past several years, and Nasdaq officials may have feared a Bitcoin ETF would blow up in their face.

The Winklevoss Bitcoin ETF is actually a better fit for the BATS exchange, which has built a reputation as the top market for ETFs. As a relative upstart, BATS - founded in 2005 - also may be more willing to venture into the uncharted territory the Winklevoss Bitcoin Trust represents.

You see, the Winklevoss Bitcoin ETF will be structured very much like the SPDR Gold Trust ETF (NYSE Arca: GLD). The fund will hold an amount of Bitcoin sufficient to back up the shares of the ETF.

The idea is to create an easy way for ordinary investors to own Bitcoin. The ETF is the brainchild of twins Tyler and Cameron Winklevoss, best known for their controversial role in development of the first version of Facebook Inc. (Nasdaq: FB) at Harvard University.

The new amendment to the S-1 filing contains significant changes in addition to the switch to BATS. Some of the most notable include:

With so many changes, it's little wonder there was no news for so long.

But the biggest surprise this week wasn't the S-1 revision, but a second filing that's been completely overlooked. This filing means the Winklevoss Bitcoin Trust may be just months away from SEC approval...

Why the Winklevoss Bitcoin ETF Is Much Closer to Approval Now

Back in May I asked Money Morning Capital Wave Strategist Shah Gilani why the Winklevoss Bitcoin Trust seemed to be stuck in neutral.

Gilani pointed to the unique nature of Bitcoin as a thorny issue for the SEC, which needs to ensure the asset is sound enough to serve as the foundation for an ETF.

"What happens if there's no bidders, no trading?" said Gilani. "How would you get out if it all goes horribly wrong? Bitcoin doesn't have a long enough history for the SEC to be able to tell what would happen."

But in addition to making the SEC extra-cautious (and slow), a Bitcoin ETF also requires the proposal of a new SEC rule - a proposal that must be made by the exchange where the ETF will be traded.

Nasdaq never filed for such a rule change - but on Thursday the BATS exchange did.

Once filed, such a rule change must be posted for a period of public comment, usually 45 days (although the SEC can extend the period if it deems it necessary).

Of course, the SEC could also choose to reject the proposed rule change. That would delay the Winklevoss Bitcoin ETF indefinitely.

However, despite the uncertainties, the odds favor SEC approval of the Winklevoss Bitcoin Trust at some point within the next eight months. And it could be just the beginning for would-be Bitcoin ETF investors.

"A rule change is huge," Gilani said. "Not only would it give the Winklevoss ETF their 'stamp of approval,' but it would allow others to create their own Bitcoin ETFs, or ETFs based on other cryptocurrencies."

Up Next: Investing in Bitcoin Has Delivered an Annual Return of 82%